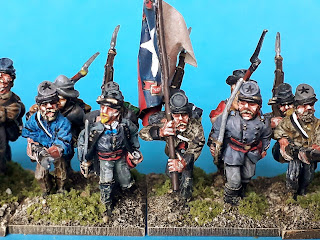 I like the painting style, it brings out the life in figures that look full of action but don't follow the modern standard of sculpting. Does this mean you've abandoned the idea of Jacklex ACW armies? Or did you always intend something colonial with Jacklex? The Boer War series would do a very nice Pony Wars style game, albeit burning the farmsteads (to stop them supporting the Kommandos) rather than rescuing them from hostile natives...

This is very nice collection. Rebasing always brings new life to a dormant collection. Well, at least for me.

I really like those Mark (ACW is my second period of interest), great painting. The Iron Brigade are my favourite in your line up, those 1st Corps figures have always tempted me. I look forward to seeing more!

I have 700, or so, 28mm ACW figures and rather start doing the ACW in 20mm I thought it was probably better to use what I already have.

It may take some time to get these done. Then there are my 28mm SYW that could do with freshening up.

The 1st Corps figures are very nice and easy to paint. What I need to do is play a few games with these figures. I just need to decide which rules to use.

Perhaps an ACW adaptation of your M&M rules.