For a change we had a game with Maurice - the new set of rules form Sam Mustafa - these being card based have a certain resonance with our group who have been into Piquet for a long time.

Anyway I decide to put on a new school game of Maurice using my Old School Prince figures.

Maurice is designed for play at any scale you like and it ideally suited to gaming big battles with between 12 - 18 units a side.  For our first game of the full rules (we have played a couple games of the lite version which is still available here  http://www.sammustafa.com/honour/downloads/ ) we decided an old school classic - the Battle of Lobositz.

I based the map on the one found in the following Volley an Bayonet site but removed all towns/villages expect for Lobositz . This site a few battles for the period covered by Maurice -  http://homepages.paradise.net.nz/mcnelly/vb/index/index_scenario_18th.htm

Each unit of Infantry/Cavalry represents approx 2500 men and each artillery unit approx 25 guns.  In Maurice terms this gave the following orbats.

plus the national advantage cards - Lethal Volley and Oblique Order

plus the national advantage cards - Skirmishers and Artillery Academy

Neither side had Notables and I did not give the Prussians a Great Capitan for Frederick as this was one of   the battles he quit the field early a la Mollwitz. The victory conditions are for the Prussians to capture Lobositz

We used the weather card as the trigger for the early morning mist clearing and only allowed artillery to fire at cannister range until the card was turned. It transpired that it was turned as the first card of the game.

Here are few pictures of the game 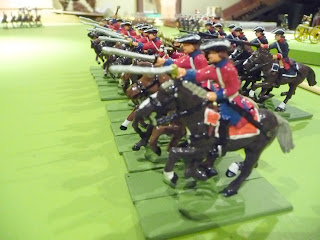 Prussian Cavalry deploy and advance towards Lobositz as the mist clears 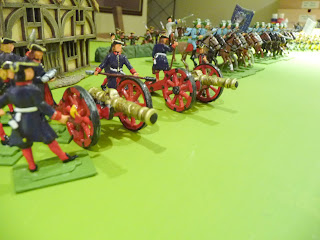 The Austrian artillery fire, despite having the Artillery Academy card, is ineffective and the Prussians crash into the Austrian Cavalry 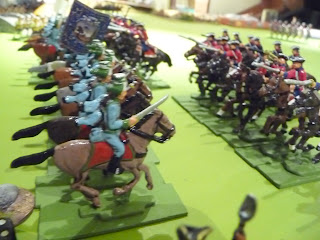 The initial melee forces the Prussians back, the Austrians counter attack but are in turn forced back. At this point the Prussians rally off their disruptions and charge before the Austrians can recover. The resulting melee is decisive and both Austrian units are destroyed. The Austrian player secretly rolls off for Morale point loss. 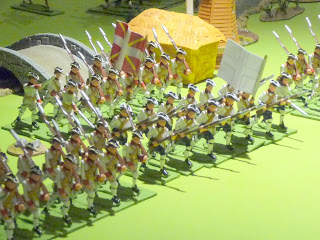 The Austrian decide that with their centre crumbling to bring their infantry across the  Morellen Bach, taking disruptions, and threaten the Prussian Cavalry who wisely decide to retire to re-organise. 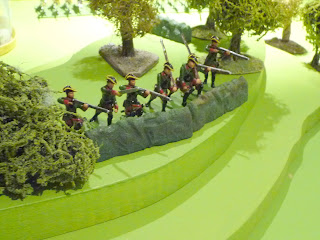 On the Lobosch the Austrian Irregulars watch with grim determination as ...... 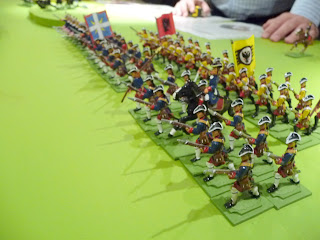 The Prussian Infantry advance.  All 8 Prussian units moved as single force as they are in the same terrain, formation and all units are within 2 Base Widths (BW) 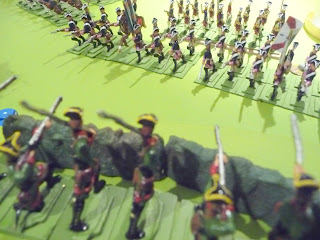 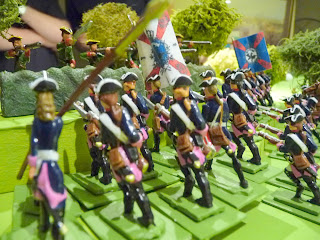 Undeterred the Prussians volley fire and then advance and after a short melee crush the Grenz. The Lobosch has been secured. 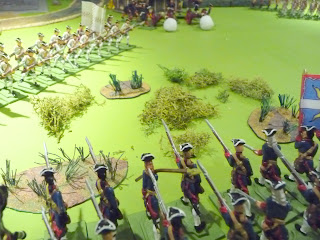 With the Lobosch secure the Prussians infantry in the centre advance towards Lobositz only to find a patch  of boggy ground in their way with Austrian Infantry deployed the other side.  Both sides enter in a bickering of musketry with the Prussians unable to gain and advantage despite the Lethal Volley Card.  An Austrian Infantry unit believing the Prussians are wavering Charge across the bog into melee only to find, to their shock a wall of Prussian steel, the unit wavers and breaks.

The Austrian unit was forced to charge by an event card played by the Prussian player.

Game to be resumed - tomorrow.   We have one more deck to run through and the game is finely balanced.

Over the last few years I have collected about 20 Prince August moulds.  They are all charming in their own way however the one that really epitomises Old School for me is the older Holger Eriksson mould number 11. 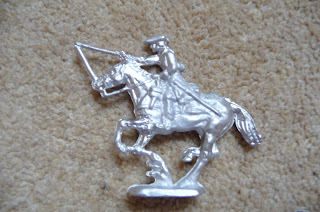 This mould is really the classic Old School classic pose and is one that Holger Eriksson used on other ranges. 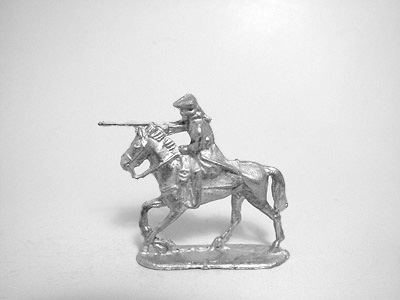 The classic Spencer Smith 30mm Cavalry figure and below a Holger Eriksson 30mm figure from the SAE range.  (both pictures from the Spencer Smith cataloge. see these and more  athttp://www.spencersmithminiatures.co.uk/index.html 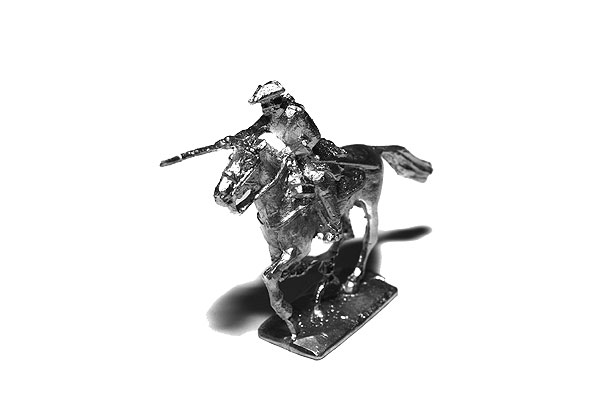 And finally a comparison shot between the older Holger figure and the new more rounded version.

I know which one I prefer 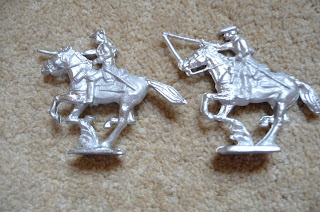 I had the day off work on Monday with no family around so I decided to spend a few hours casting up some more Prince August figures. The morning session produced quiet a lot of miscasts figures. Frustrated I decided to have a spot of lunch and get some air.

After Lunch however I really got into the swing with very few miscasts going back into the pot. 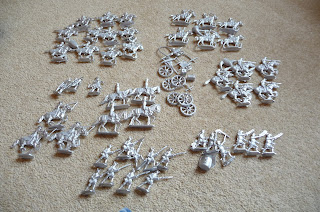 In all I cast up 28 Cavalry types, 18 infantry/gunners and 3 limbers and wheels.  In all I used just under 2 kg of metal.

The Limbers are going to be converted so they have two single horses rather then a team of 4. I am also going to use the Limber cast to form the basis of the 2 wheel wagon with a single horse/rider.

I did have problem casting wheels from Prince August moulds however the ones in the picture are from a  Nurnberger Meisterzinn mould and cast up a treat.