I have finished off the 12 figures of the Chasseur Flankers. The unit consists of 22 original Alberken/Minifig figures with a recast Hinton standard bearer and drummer. 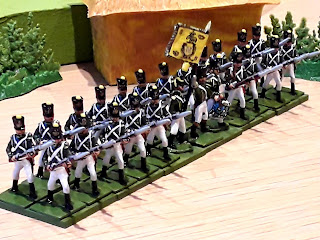 The Green and yellow go together rather nicely although it took 5 coats of yellow paint on the flag. I am not entirely happy with the flag as the eagle looks like a pigeon. 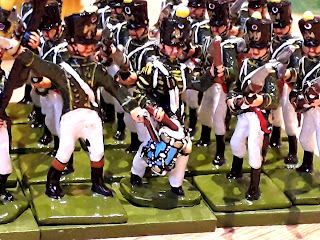 Alberken officers have a strange pose which I have tried to alter by bending the arms slightly. I had to do this to make room for the Drummer to fit. 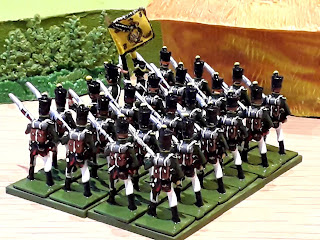 So I have finished my first 12 Figures of the year which earns me 12 points. I have a French Rose (?) Voltigeur Officer almost done.

In other news I have decided to use the prepainted Russian Alberken figures (see previous post)  as they are yellow varnish and all.  True veterans in more than one way. There are only 20 of them so I am painting a DK standard bearer and coke can flag to add to the unit. The interesting part is I am painting him to match the rest of the figures including replicating yellow varnish.

Lovely unit - that's a very attractive shade of green set off by the yellow facings, I'm sure they will fight well for you.
As for the Russians I'm intrigued by how you're going to match the yellowing varnish - I assume you'll try it out on a few trial figures first, or have you done this before?

I am trying it out on the standard bearer. I am using thinned down burnt sienna acrylic ink as a kind of wash.

It's not quiet a match but pretty close.

One of my favourite units Mark, youve done a lovely job on them, well done.

Those look really nice Mark. Might be hard to get them to fight to protect their pigeon however!