I am a few days late in getting this unit finished as I hoped to complete on the 18th June. 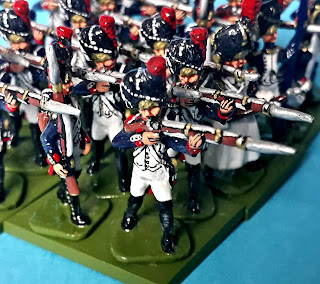 The unit consists of both original and recast figures. The standard bearer may be a DK figure but I am not sure. The Sapper is of unknown origin. 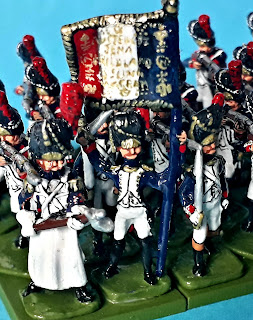 The unit from the back. Something the enemies of France seldom saw. It was a bit fiddly getting the figures to fit on the bases but with a bit iof wangling I managed to get them to fit. 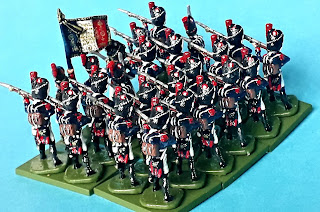 I added a couple of sergeants to ease the congestion on a 2 of the bases. This means I have enough figures left over to create a 4 figure Grenadier company in bearskins for a Swiss unit I am contemplating on adding to my French army. 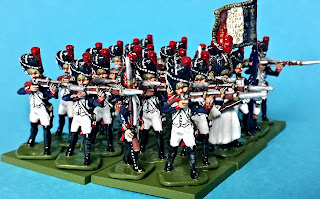 As requested by WM and Rob a picture of the unit in line.

Next up on to am going paint refurbish a unit of British.

I got a unit of these painted Infantry as part of a trade but without command. The figure looks to be a copy of a BN7 with a slight pose change and a musket added before being cast. It's not a bad casting and I have enough unpainted for 3 more units. I have some original command to paint from scratch to complete the unit.

Lovely detail on the waistcoats! I think that standard bearer may be a Clayton offering. I should be ready for our challenge in a week or so!

Great looking unit, well done. It really has that Old School look about it. Going through your blog brought back lots of great memories of HH figures from the late 60's. Cheers greg

Those are fantastic, Mark! Any chance of seeing a shot of them in line? A volley from that lot would be something to see!

Incidentally, I have a standard bearer like that, although I haven't painted him yet. My theory is that he's a 'Replacement Depot' job. According to Vintage 20mil was "US company that pirated Hinton’s figures in the early 1970s". They were based Rockaway Park, New York, apparently.

A fine unit Mark, really well painted. Be interested to see what make the Sapper is?

Just, well just... I'm jealous as sin. Also can I throw in my two ha'p'orth with WM and ask for line photo shoot?

Re the shot in line: Every bit as intimidating as I'd thought it'd be!
Cheers!
WM

Super line shot, thanks - I knew the Old Guard could do just about anything... but flying? That's a new one, no more slogging up that muddy slope. ;o)

The waistcoats and buttons took a bit of time however doing Black gaiters was easier.

My British unit refurb is underway.

Does yours have the flag engraved as the 45th Regiment de Ligne?

The Sappers origin may remain a mystery.

Firing Line added. In the charge rules Grenadiers/elites get one D6 per 6 figures instead of one per 8 for line Infantry.

Re: the standard bearer.
Yes! It's clearly a line standard soldered rather inexpertly to a BN 21: Old Guard Grenadier officer, charging!

Great looking unit, your collection is growing. Look forward to seeing the British.