I recently made a small purchase of some metal Spencer Smith figures from the Austrian Succession range. The figures are just like the plastic ones I had in the 70s. Well I have managed to paint up my first unit of Infantry. As my Imperialist army is based on the Austrian it is no surprise that these are wearing nice clean white uniforms. This company is the first of the Kinski Infantry regiment and is named after the Empresses Joanna young daughter - the princess Emma Kins 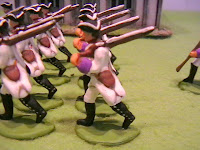 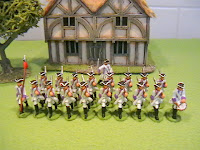 I have matt varnished these figures and will be using them unbased. Although I may need to reconsider this once the collection grows. 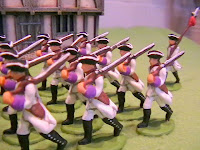 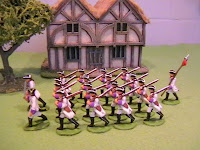 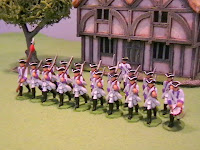 I will have to place a further order to get the next 2 companies but until then I am painting a squadron of Electoral Dragoons who look like the Montmort Dragoons from Charge. These will see service in the Elector Max Josephs army.
Next units to be painted will be an Electoral Light Infantry/Frei Korps and some artillery.
My next old school game will be the first teaser from the Chiraz book using my 28mm SYW collection. I suspect the Kinskys will have a role to play as the Chiraz garrision of the arsenal.

The Annexation of Chiraz

I purchased this excellent book by messrs Olley and Grant at the York show on Sunday. This is an excellent addition to any Old School library. There are 5 scenarios that can be fought separately or as part of a linked campaign. The book is well illustrated with maps and gorgeous colour pictures to wet any wargamers juices.

This book has inspired me even more to get some Old School gaming started sooner than later. The quick way is to use my current SYW collection based on units of 16 and combine them into either 32 or 48 man combined regiments. I am now seriously thinking of re organizing my collection and creating 36 man units for infantry and 18 man cavalry/light infantry units. I think that this organization would work for both Charge or the War Game although I will have to mark officer casualties for the War Game on Roster sheets.
Posted by Mark Dudley at 05:13 4 comments:

I thought I would provide and update on my Old School project plans.

I intend to base the armies on the War of the Austrian Succession and the period will loosely be set sometime between 1745 and 1750.

On one side will be the Electoral Council. The electors, or Kurfürsten, will each be expected to contribute detachment for service in the electoral army. The army will consist of units based on historical armies from such as counties such as Bavaria , France , Spain , Saxony , Prussia and Russia as well as smaller minor states and Freistadtes.

The Imperial army will represent the Austrian, British and Savoyard armies

I will be basing my units on actual units and uniforms of the WAS. I will however be providing some units with new inhabers and renaming formations. If I like a particular uniform for instance I may change the unit type. For instance a Croat unit in brown and light blue may become a line regiment or a Saxon electoral artillery unit will be dressed in red coats with yellow trousers of the Leib guard.

The other point of interested is the different figures ranges/sizes I am going to use.

40mm Prince August flats.
28mm Mainly Foundry, Front Rank, Old Glory and Dixons
30mm Old school ranges– Spencer Smith (small shipment due this week) and Jackdaw (artillery bought at York show) plus some Minot Prussian (early Napoleonic?) which I started 35 years. I only finished 8 in that time so it’s about time the other 16 got done.

I may try using the 30mm Old Schoolers with my 28mm collection- but then again maybe not.

The rules I intend to use will depend on the mood I am in – Charge (elementary and advanced), The War Game and perhaps Don Featherstone’s Horse and Musket rules.

Anyway here a few shots of some of my and James 28mm SYW during a game at Triples a few years ago. 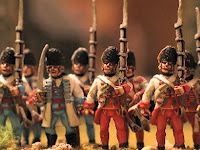 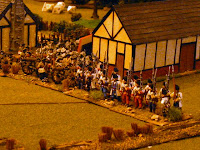 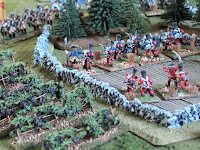 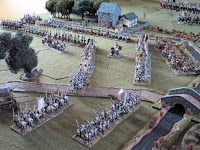 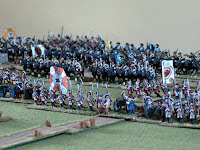