As I while away the last few days of work before I retire I realised I had few points  left in the company rewards programme.  Well I thought I better spend them so perused the online catalogue. Normally I end up getting stuff for the wife and kids so I had not great expectations that this would be any different.

Well I found something useful for me for once and got one of these. 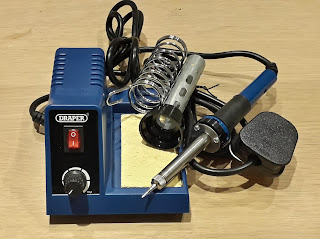 The soldering point looks like I will be able to do some fine soldering and the variable heat control should allow me to apply a low heat without reducing figures to gloop.

I will try a few practise runs before I try any repairs on a Hinton Hunt figure.

I have been having a break since June from painting classic Napoleonics. However I am putting a participation game at a small get together in late November and I  really need another alied cavalry unit to balance the armies.

I have quiet a few unpainted units to choose from including Austrian, Prussian and British.  In the end I decided to go with a unit of one piece castings of the Scots Greys. 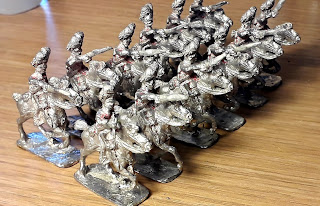 I got these figures a while back and the previous owner has altered some of the figure positions to make the unit more  animated. The horses have all had their tails docked. The figures have been painted some time in the past as there is still some red left on the uniforms.

Originally I was going the repair the tails but I have decided to go with the docked look. One figure had no hand or sword so I decided to graft on a bugle cut from a Newline figure. Some of the swords were a bit weak so I covered them with a thin layer of super glue at the weak points. 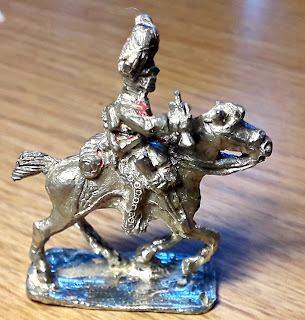 I used gorilla super glue to a fix the bugle hand to the figure as I have found this is a strong enough bond. As a change I will be using a grey undercoat rather than my normal black as I hope this well speed up the painting time.

I have also be doing some more rebasing and refurbing of my 28mm ACW collection. 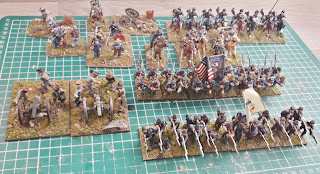 About 50% of the collection is done and I hope to complete by the end of the year. 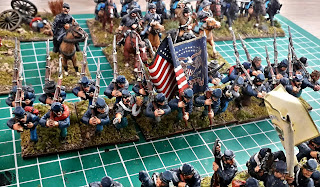 The vast majority of the figures are by First Corps and painted about 25 years ago.