I seem to be painting a lot of Green recently.

Last year as part of a trade I got a bunch of Les Higgins figures including 30 Rifle types painted green.  The 3rd Bttn of the 9th RIR were equipped with British Rifle uniforms in 1813 and wore them all the way through to Waterloo. 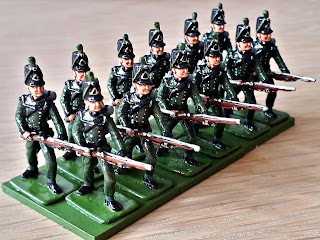 This weekend I finished the first 12 rank and file and got them based and ready for inspection. 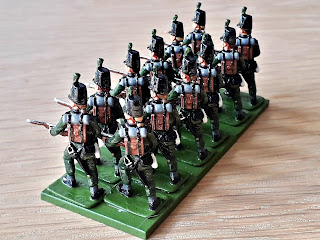 I had originally planned on adding bayonets but in the end left the figures alone. 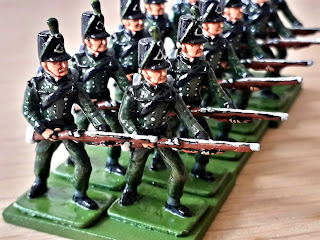 The next 9 rankers are 50% done and the command will be provided by a Hinton Hunt officer and drummer in standard uniforms. This will add contrast to the unit. The standard bearer will be a Les Higgins officer, the type pointing, which will be adjusted to take a fizzy can flag.

I hope the get the unit finished by the end of March.

In other news today I took a short trip of just over a mile to Ilkley Moor for a breath of air and to stretch my legs.  I got to practise some Social distancing. 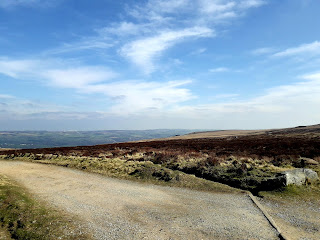 Pretty in Pink is a song by the Psychedelic Furs from 1981. It also captures how these French Dragoons have come out - they are 'Pretty in Pink' 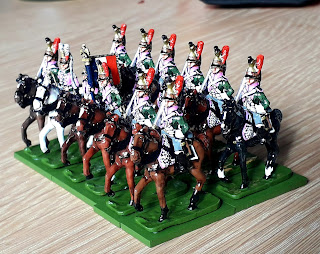 The figures and Horses are recast Hinton Hunt figures and the command figures are provided by Newline. 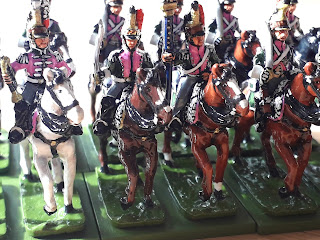 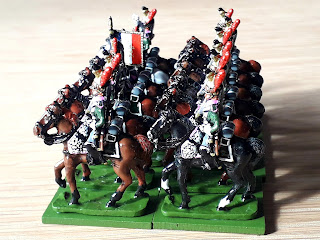 I have painted these as the 17th Dragoons. The flag is made from a diet coke can. 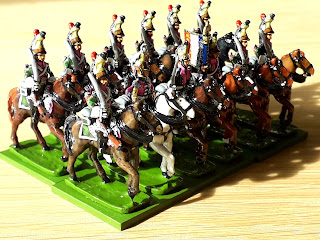 The Hinton Hunt figures are in pre Bardin uniforms where as the Newline ones are latter period.  The Dragoons will be brigaded with my Carabiniers.

I do have another unit of Dragoons to paint but these are way down the painting queue.

Next up on the painting table are a unit of Les Higgins British Rifleman that have been previously painted.  This unit will be the 3rd Btth 9th Prussian RIR (21st IR in 1815).

I was going to add bayonets to the figures but have decided to keep it simple and not bother. As the main colours are black and green I am going do a paint renovation rather than a full strip and repaint.
Posted by Mark Dudley at 06:09 8 comments: