I have finally finished my 5th Regiment de Ligne 3 weeks later than planned.

This unit is made up using Alberken/Minfig 20mm figures. 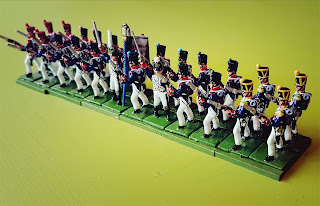 The 5th was originally the Navarre Regiment in the old Royal Army and I choose this unit for its role in the 100 days campaign and the scene in the film Waterloo. 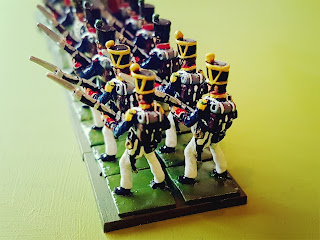 The elite companies are a rather nice figure. The previous owner had chopped the plume down to make a pom pom. 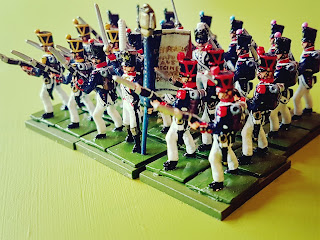 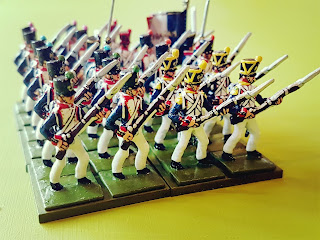 Inspired by WM flags I had a go at a making a flag using an old Coke can. I found it easy to cut using a pair of scissors and the metal is thin enough to bend an fold without any problems. Painting is not too difficult although I had to do embroidery twice after my first attempt ended up with the letters too large. 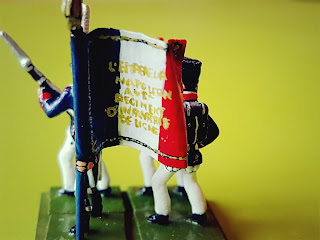 The 5th Regiment only had one battle honour - Wagram. This made it a easier to paint this side of the flag. 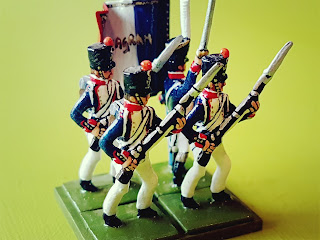 I have been making slow progress on the elite companies for the 5th Regiment. I have got to the point where I am the white bits (cross belts,straps and piping).  Its at this point I feel that I am finally getting somewhere at the end is in sight. 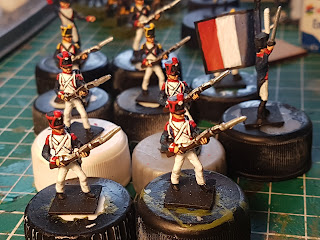 For this unit I am also doing a coke can flag.  I have the basic colours added.  The next part will adding the embroidered details. This may take some time. 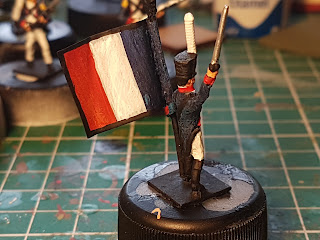 I hope this will be completed by the weekend ready for varnishing and basing.

Once this unit is done I will have enough figured done for a small game of Austro/Prussian/British vs French.

I plan to paint some cavalry next.
Posted by Mark Dudley at 01:49 10 comments: