Last night I took a short trip off less than a mile to James Roach house aka Olicanalad for a Napoleonic game using Black Powder. I have only played BP once many years ago.

The game featured a British force defending a Bridgehead against a French attack.  The British had to hold long enough to allow a vital bridge to be mined for demolition and for the British  rearguard to get as many units across before blowing the bridge. 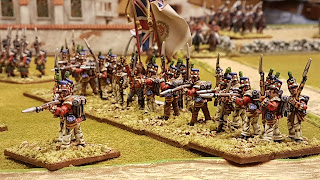 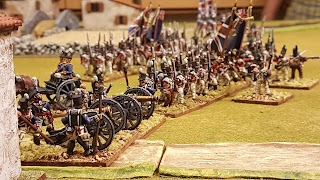 All figures are Front Rank and painted by James. British Infantry stoically stand to in line ready to buy time for the engineers to work on mining the bridge. 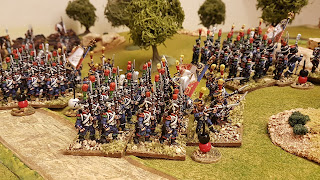 My command consisted of a cavalry brigade consisting of a hussar and dragoon regiment and 3 battalions of the 2nd legere.
My first command move allowed 3 moves and my infantry moved forward rapidly in columns. 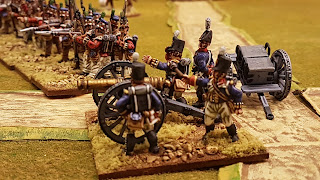 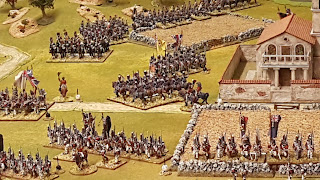 Using my cavalry to protect my flanks. My Dragoons firstly drive off some British Light Dragoons before crashing into a British infantry unit in line, and after a short melee, break the unit in rout.

On my other flank the hussars force the British into square. My columns advance with elan and although the square holds my initial assault a second  round of melee sees the square destroyed.

My triumphant infantry are able to move into the town at this point we called the game as a French victory. 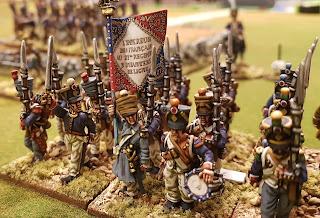 My command was the smaller of the two French. The other French command was bedevilled by high command rolls and was unable to put much pressure on the British defences.

Following my recent post I have been given some command figures to lead my new recruits.

Firstly Ken has sent me a French Voltigeur Officer and a British Rifle Officer. 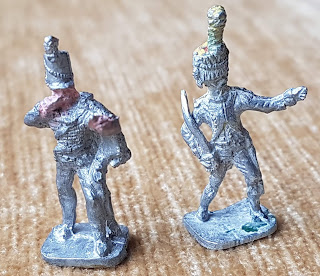 And secondly a French Voltigeur Bugler is shortly on its way from New Zealand, via Scotland, from Matt.

The Hinton Hunt community may be small,  and spread across all 4 corners if the globe, but is not only supportive but generous.

On my painting table I have the remaining 23 figures to complete the Prussian 9th RIR.

I started painting them on Sunday and I am painting a little bit each each day. I hope to have the figures finished this Sunday ready for basing.
Posted by Mark Dudley at 06:32 4 comments:

I have completed a test figure of the 9th Prussian Reserve Infantry (21st Infantry in 1815). This unit used British/Portuguese uniforms from 1813 all the way through the Waterloo campaign.

I have used a Garrison British Light Infantry figure and cut down the base so that 4 figures will fit on on my 25 by 30mm bases.

I have 20 of these chaps so I will need to find/convert some command figures. 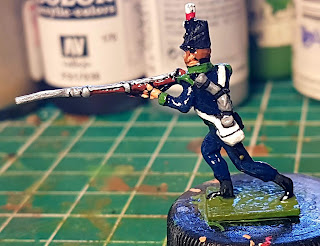 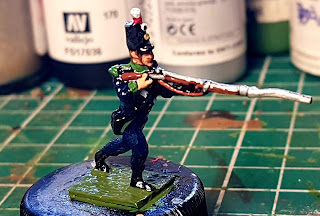 As a reminder the original figure looked like this. 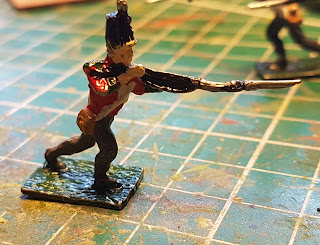 I have 3 choices on my short list to paint next.