My son Max is 7 and showing more interest in gaming. He has been getting into the American Civil War and has been looking at the drawings of the battles in a Bruce Catton book drawn by David Greenspan. These pictures inspired me as a youngster and seem to be having the same effect on my son.
So this afternoon I got out my old and battered copy of Battle Cry by Milton Bradley for a game. 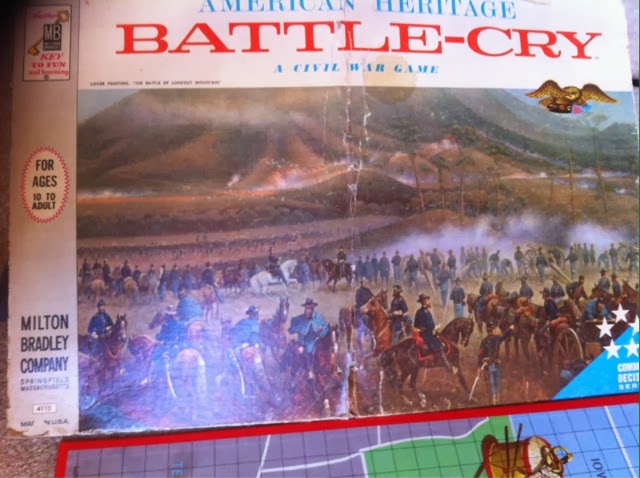 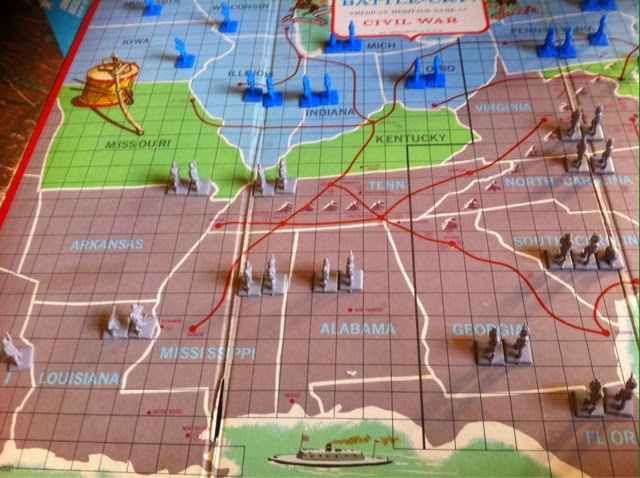 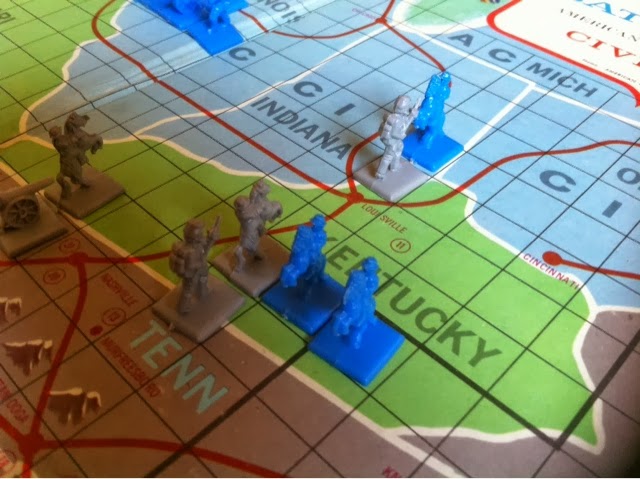 I played the Confederacy and Max the Union. The rules are simple and he picked them up quickly. We played for an hour or so and the battle was raging in Kentucky when we had to halt the game for dinner.
Posted by Mark Dudley at 13:22 No comments:

You can tell the age of tree by counting its rings. For a wargamer it's a bit harder. For me I know I was gaming by August 1969 because I still have the first magazine I bought from Teddington Model Supplies. 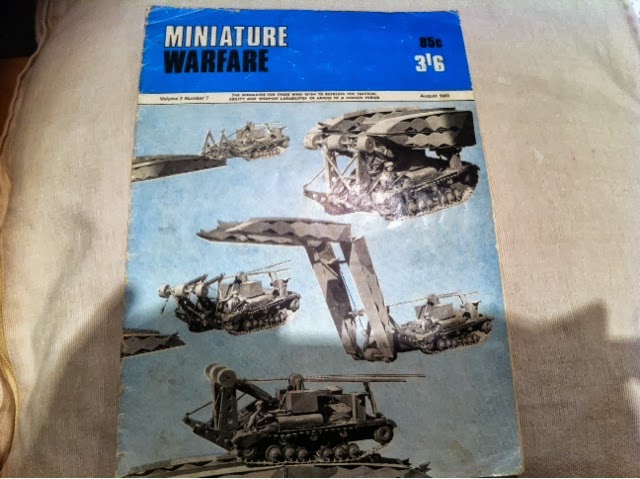 And a closer look at the date. 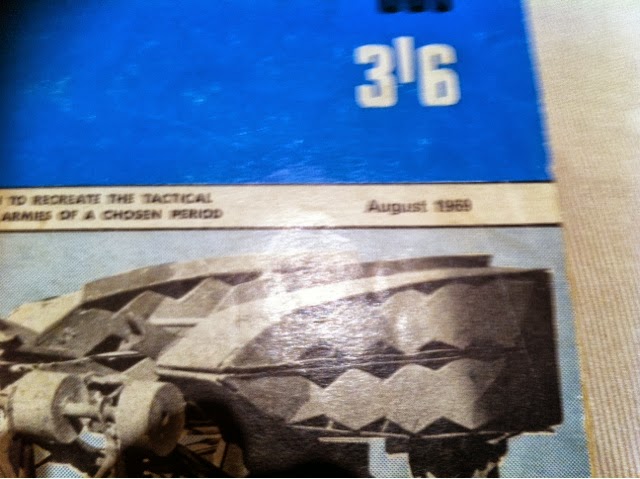 The next issue had one of my favourite covers and certainly helped kick of my ACW Airfix collection. 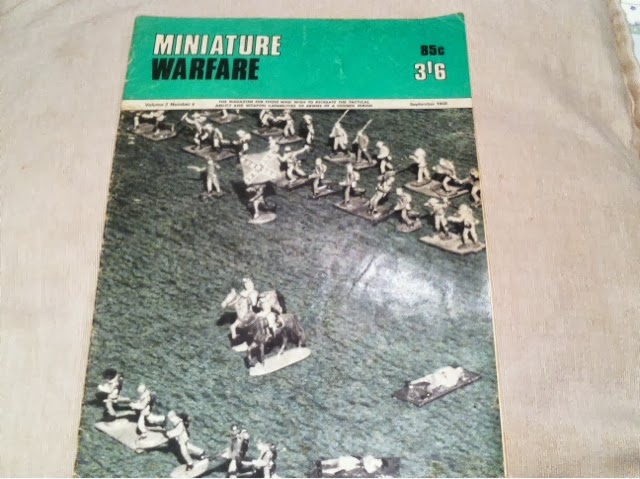 With adverts like this it was not long before I ventured North of the River buy Hinton Hunt figures from Camden Passage near the Angel Islington. 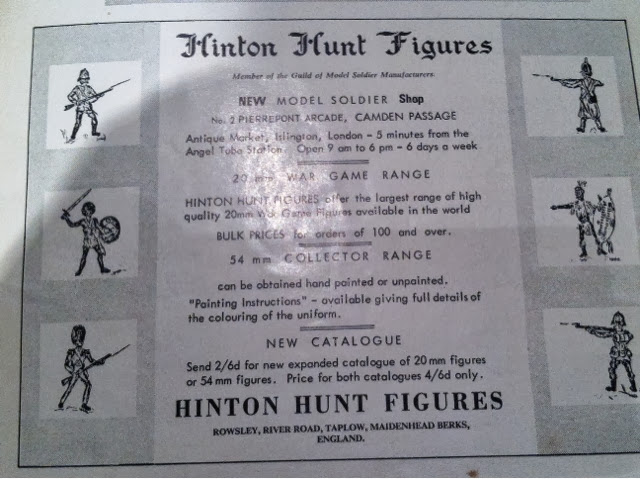 I am now going to browse through my collection of Miniature Warfare mags whilst sipping a glass or two of fizz.
Breaking news - today I bought 267 Spencer Smith original plastic figures on eBay. Looks like my Plattville project is back on
Posted by Mark Dudley at 12:18 4 comments:

We had a game of Musket and Tomahawks on Friday. This was our first game with these rules and it was good fun game. 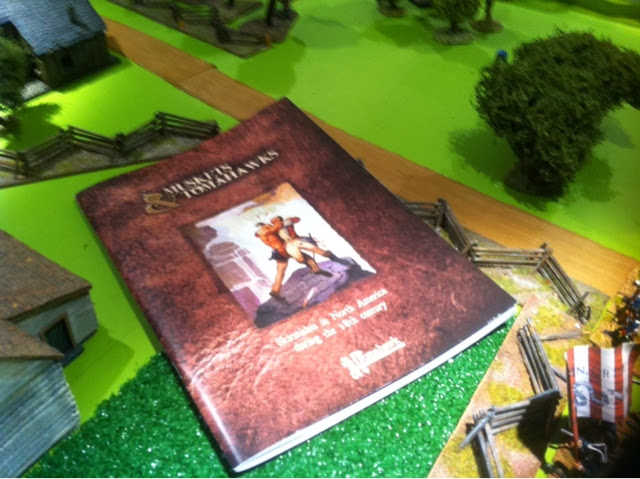 The game was set during the American War of Independence and featured our small collection of 40mm figures made by Sash and Sabre and Front Rank. We will be using these rules and figures for our participation game at next February's York show. The British had one regular and light infantry units whilst the rebels had one continental, militia and rifle units. 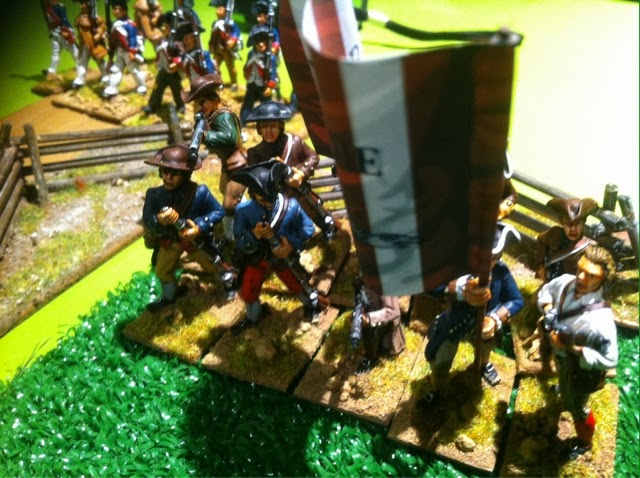 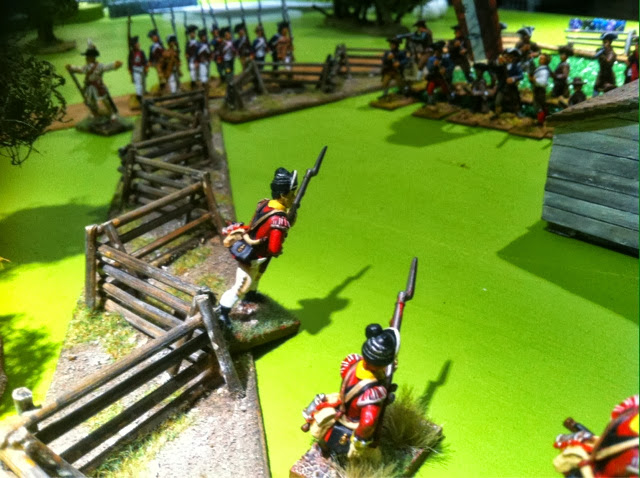 The game was close with each side thinking they were going to win until the end. 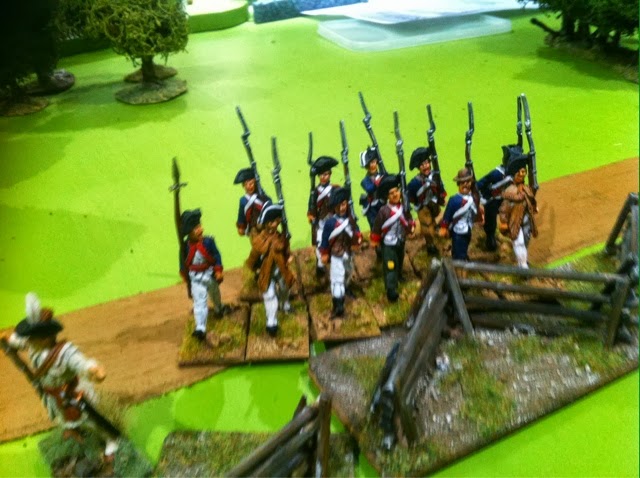 Ultimately it was the British Light Infantry who won the day. 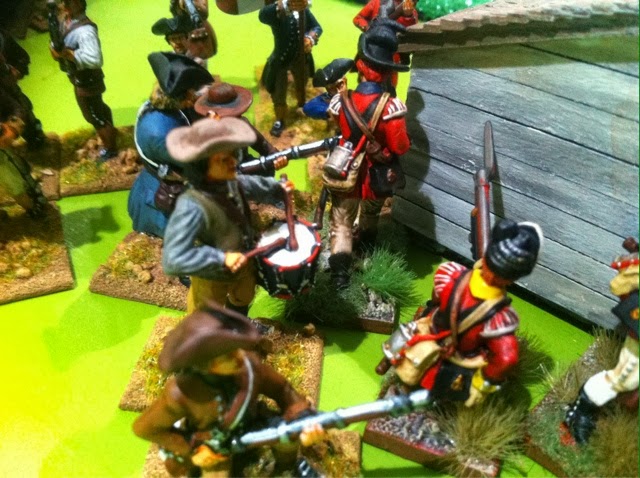 They fought and attack by the American militia. Falling back they reformed and them proceeded to open up with their muskets. The militia were unable to take the accurate fire and quit the field,
These rules are fun and I can see working for some Petit Guerre action between the Elector of Lederhosen Furstenburg and Duke of Calvados using my 40mm Prince August figures,
Posted by Mark Dudley at 07:24 2 comments:

I have recently bought a copy of the Longstreet ACW rules. I know these are not Old School but after a couple of games I can confirm they are a cracking set that are great fun to play.  It's been while since my ACW collection has been on the table however we are planning to kick off a Longstreet campaign in the next few weeks. So you can expect more updates on this.
Here are a few photos of one of these games. 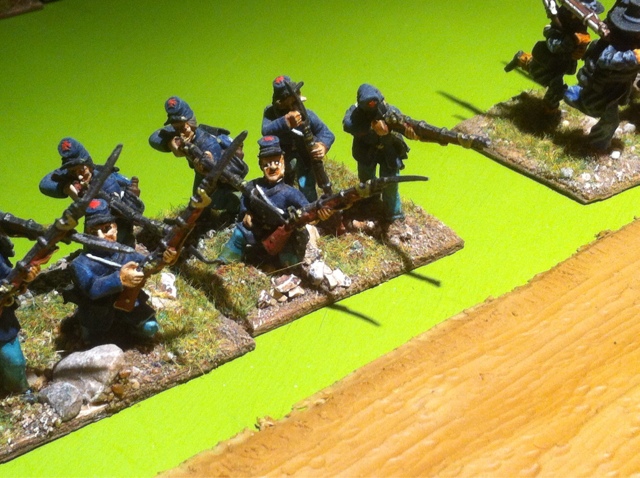 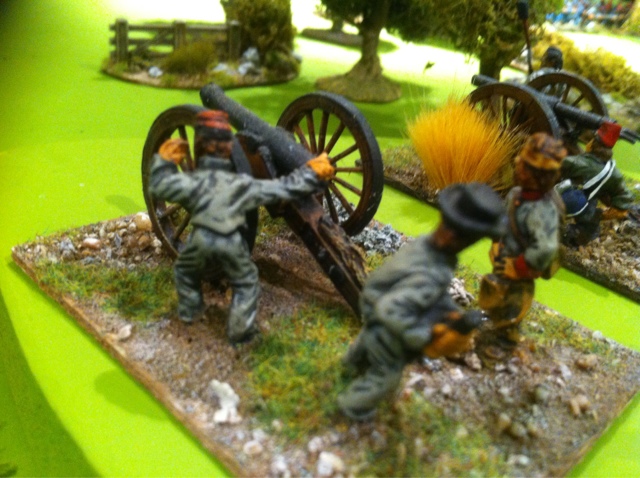 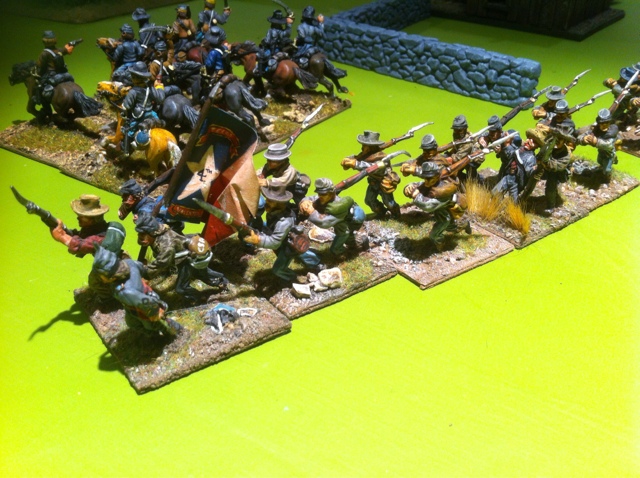 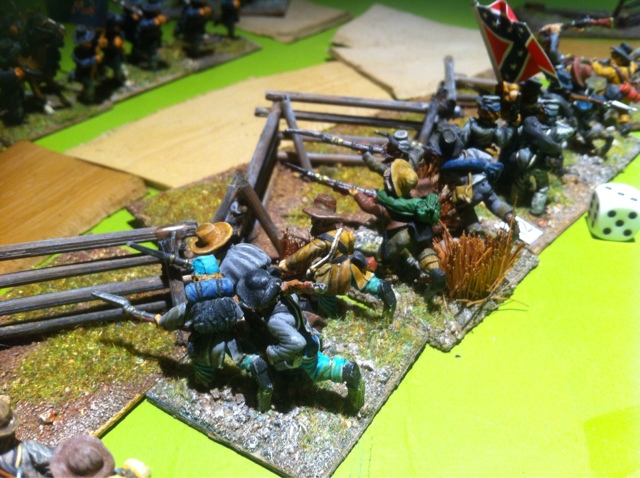 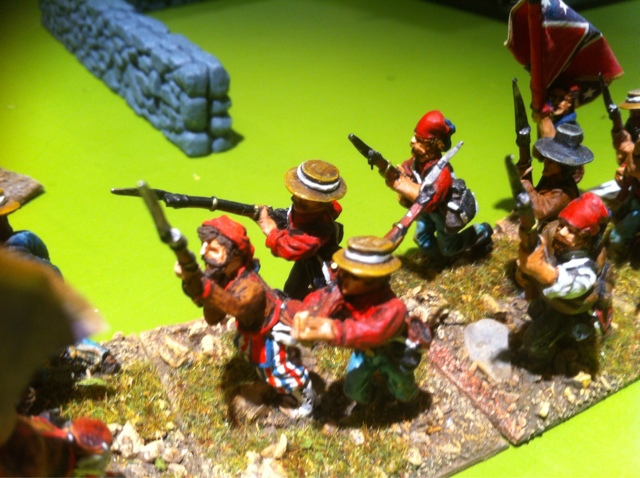 It's been a while since I posted anything. This post is also my first using the Blogger App on my IPhone. Not every Old School I know.
June was spent finishing off and article and pictures for the Wargamers Annual 2014 titled "Casting Away". The article is about how I got started gaming, casting Prince August figures at home and my Imagination Armies.
I have also been to Partizan with my 7 year old son. He spent most the time playing games and really enjoyed playing Dead Man's Hand cowboy rules by Great  Escape Games. So much so I ended I up buying a copy to use with some old 54mm Timo cowboy figures I had when I was a lad.
The game that grabbed my attention was   Aly Morrisons Hook Farm game using the     Little Briton range available from Spencer Smith. 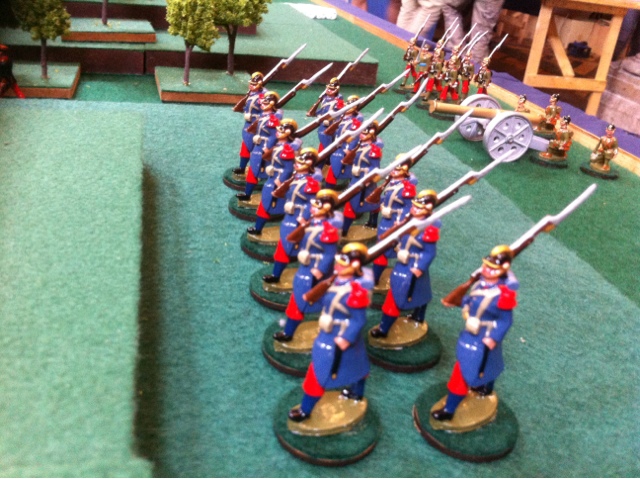 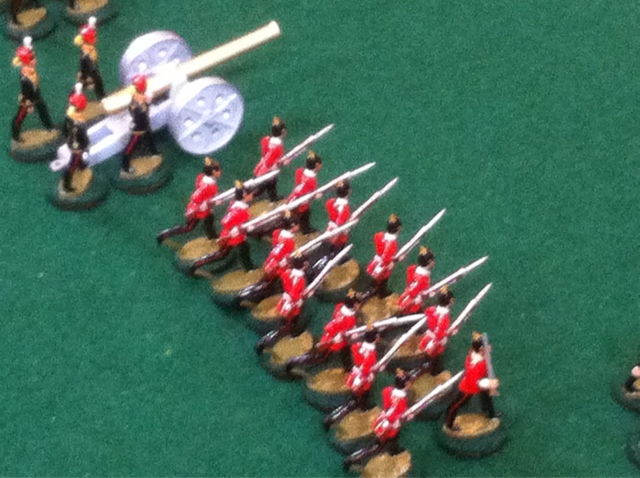 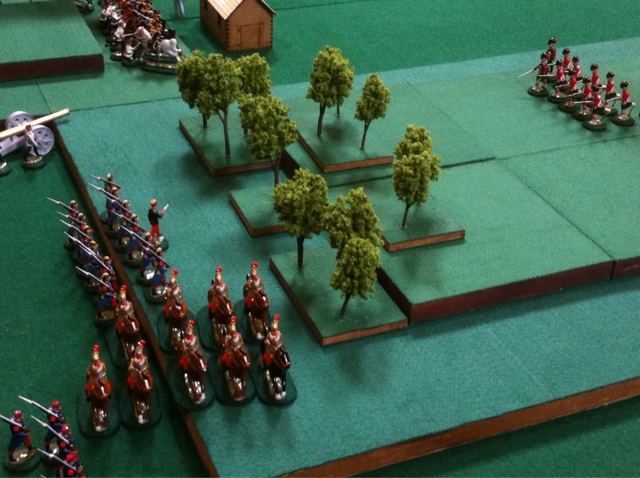