A recent Ebay purchase has added to my British Napoleonic refurb pile. I now have a few figures from a number of the ranges available in the early 70s.

The first image shows figures which I am fairly sure are Alberken/early minifigs.  The codes I believe are left to right:-

Update.  I have added a link to Old Metal Detector blog which shows the first 2 figures in an old Alberken boxed set.

The next image is a comparison of some the classic figures, from different manufacturers, I have awaiting refurb.

The Higgins figures are a bit wooden and The Garrison is taller.

The weather is a bit dodgy here today with temperatures at zero with snow flurries.  However this meant that my sons Rugby match in Settle was cancelled.

I used the time to do some painting on the French 5th Regiment however my painting  mojo was not there.

Before Christmas I had bought some old Airfix kits and I thought why not do a bit of gluing instead of painting. 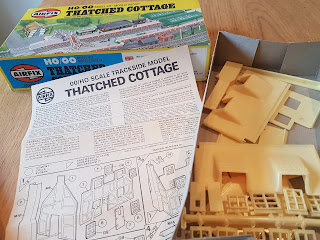 The kit was complete and looked nice and easy to do. Just the ticket for a Sunday afternoon. 20 minutes later and it was built. 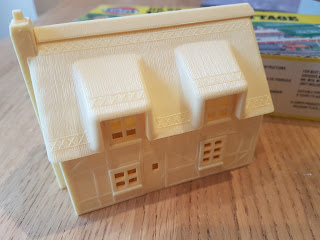 The Prussians are in the woods!

Over years the I have had various Napoleonic wargame armies in different scales. I have collected most of the major, and many minor, nationalities. However I have never had a Prussian army. When I started my classic Napoleonic last year I decided that I was going to do some Prussians.

I have so far managed to get 2 units of Hinton Hunt original cavalry units and  a recast Blucher. Today the postman delivered a small parcel and to my delight I now have some Prussian Infantry.

These figures are part of trade with Tony S who is getting my Garrison French in exchange. Part of the fun of collecting classic Napoleonics is the searching and buying figures and exchanging figures with other gamers.

I now have 3 Infantry units in my painting pile,  First up is s unit of DK Line Infantry including a standard bearer. 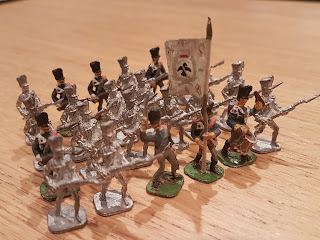 I had originally got in contact with Tony via a post on Matt's blog regarding sone DK Lutzowers. Tony had included this unit in the trade and he has added a couple of Prussian command figures. I am very pleased with this unit and it will go with my Lutzow Lancers. 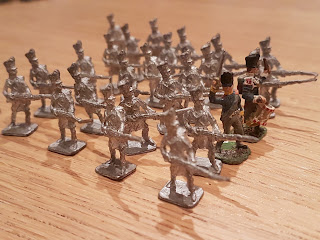 And last but not least a unit of DK Jagers with Officer and Hornist figures. 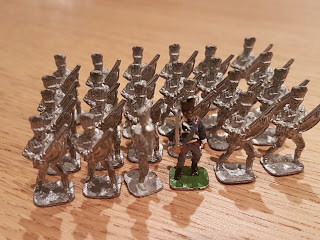 I now have quiet a queue of classic figures to paint. I have decided I need to sit down and have a painting plan.  My first objective is to finish the French 5th Line by the end of January.
Posted by Mark Dudley at 12:40 4 comments:

This morning I finished varnishing the first 2 Fusilier companies of the 5th. This unit will be formed using Alberken/early Minifigs and will consist of:- 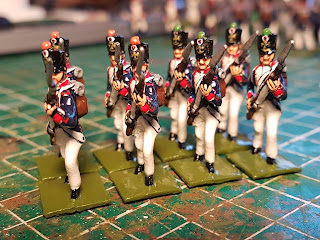 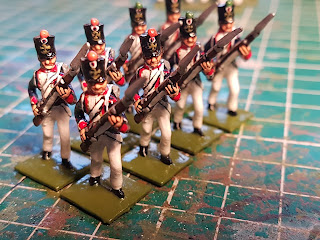 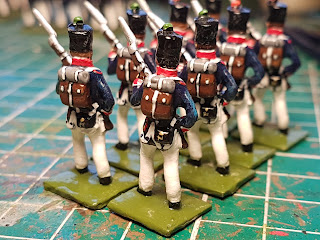 I decided to do a paint restoration on these figures rather than a full strip as the original figures had the main block colours completed.

This is how the figures started out. 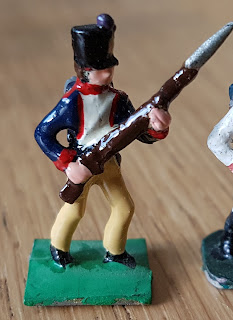 These figures do not have the detail that is found on similar Hinton Hunt figures but will mix well on the table.

I decided to form these as the 5th Regiment de Ligne after the scene from the film Waterloo where Napoleon strides out alone in front of the bayonets of the 5th regiment, crying: "If you want to kill your emperor, here I am!"

They defect to him immediately.