Tim and Peter come over for a game of Charge a few months ago and I have finally got time and updated the blog with some photos and a after action report.
The Battle of Chianti was fought along the River Blast between the Imperial forces and those of the Elector of Savaloy. 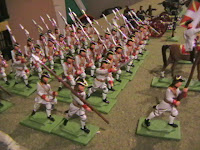 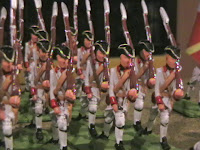 The Imperial forces consisted of 2 regiments of Infantry supported to be 2 guns and a detachment of Hussars.  The Electoral forces consisted of 1 regiment of infantry, a company each of infantry and light infantry, supported by 2 guns and a unit of Dragoons.
The first 2 pictures show the Imperial Brie Regiment recently brought up to strength with a newly raised company.  My infantry regiments consist of two 16 man companies plus various officers etc and in all have 40 foot castings and 1 mounted CO.

To pad out the numbers for this game I used some AWI Sash and Sabre figures to support the electoral  forces. These figures are part of a stalled AWI project I started a few years ago and was their first time in action. 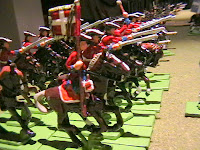 In support the Electoral forces had a detachment a Dragoons

The game was played using the advanced rules from Charge on a 6 ft by 6 ft table and was played in my basement wargame room - hence the poor light for the photos. 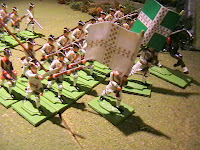 The action opens with an advance by both sides with colours to the fore and drums beating. The Royal Boursin are a well equipped and a sturdy regiment. It advances on the right bank hoping to secure the bridge before the electoral forces.
The Royal Boursin are supported by the Regiment Brie escorting the artillery battery 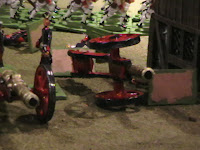 . The action opens with the Electoral artillery opening fire against the Imperial artillery.  Tim glumly looks on as his artillery are still moving as they are unlimber. Things get worse as one gun is quickly put out of action. A hit followed by a 6 on a D6.
The Brie reach the bridge and consolidate their position

The Royal Boursin let loose a tremendous first volley which lays low many from the ranks of the Electoral Militia. 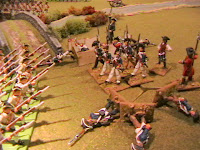 Unable to bear the volleys the militia breaks under the pressure and runs to the rear. 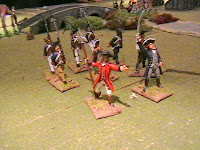 In the centre the Sbrinz advancing maintaining well ordered ranks. 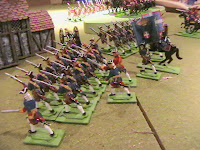 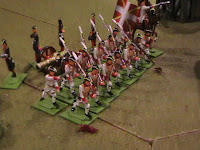 The Royal Boursin having seen off the militia cross the river Blast to aid the Brie in their fight. With flags flying and drums beating they are an irresistible sight.  ﻿ 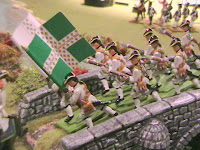 However their march is in vain as the Brie break allowing the Sbrinz to occupy the village and flank the remaining Imperial gun. The resulting volley lays the crew low. 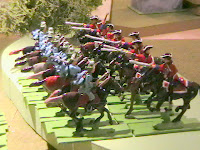 Another fun game using the Charge rules.
Posted by Mark Dudley at 02:36 4 comments:

War of The Spanish Succesion

I have finished my first unit of French (less the flag) of for the WSS. Tim will being doing British and Graham the army of Piedmont. We have decided to use 20mm Plastic figures from the Zvezda GNW range. These figures are really well sculpted and do paint up well.
This battalion represents the Royal Regimnet and was one of the French units dressed in Grey/White.
﻿ 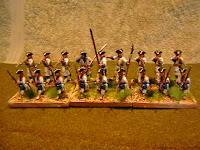 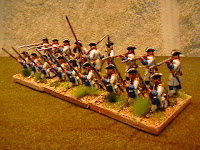 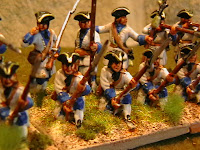 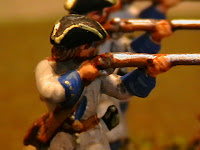 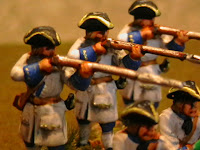 I have just taken the plunge into the 1/72 plastic pool and finished my first Sapanish unit using HaT 1806 Prussians with a few 1805 French thrown in. The bases are made of card with 1 pence piece fillers to add some weight. 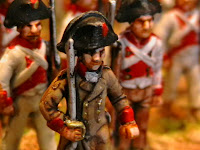 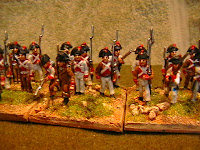 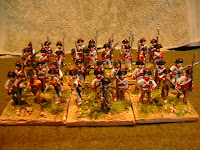 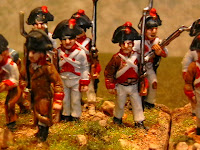 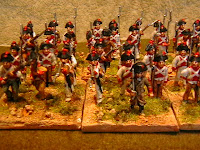 The method I used was to washed first and then spray with Rustoleum White primer. This is now available in the UK from B+Q. I used a light grey ink and Johnsons floor wash (the UK version of Future) mixed with warter and used acrylic inks for much of the equipment and unit facings. This is so easy to use as it is a flows and stains the colour on. If using Inks do not use any more Future as this will and lifts the ink and it will run
all over the figure. I just used Rowney Acrylic matt varnish to finish.
In all I painted 38 figures in about 5 hours - which is way quicker than my nornal painting time.
The biggest issue you will find is that many wargamers look down on plastic figures as some sort of inferior product. In my group 2 reject the idea of plastic out of hand where as along with 2 others we are now embarking on a doing the WSS using Zvezda GNW figures. See next post for photos
Posted by Mark Dudley at 08:50 2 comments: