I recently bought a few painted FPW Zinnfiguren for German eBay. They were painted but were a bit rough around the edges.  I quickly over painted the 32 figures in a few days and have now finished basing the first stand.  These are a mixture of manufacturers (engravers is the correct term) and mixed together on these large bases (75 by 50mm or 3 by 2 " for non metric viewers).
These figures have a certain charm and the feeling on movement and action cannot be bettered by full round figures. 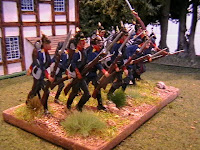 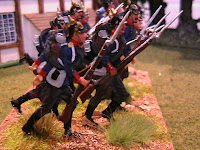 Form the side or an angled view the base is packed with action and looks like a dense formation of infantry. Looking straight on or from the rear does not work with these figures 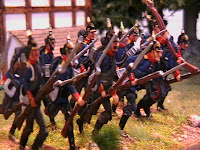 A closer view shows how a simple single shading brings the figures alive. In fact these were a lot easier to paint then I thought. But then I am a wargamer and not a flat collector. I have some more figures kindly donated to me from Roy Boardman (British flats figure society) and I will be stripping these factory paints off using Dettol and painting from scratch. 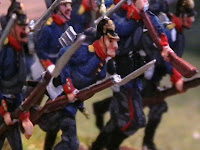 My plan is to use these figures for some 1866/1870 gaming use a range of rules including Donald Featherstones the War Game with additions rules in his War Game Campaigns book in the re fight of the battle of Spichern.

After a couple of false starts I have finally got the Campaign underway. It is basically a 2 player game of the Sport of Kings campaign from Age of Reason. Tim is commanding Britain, Prussia and Sweden whilst I am commanding France, Austria and Russia.


The open move has generated 3 engagements which will be played put over the next 2 months.

The first battle is between the Austrians (7 sps) and Prussians (6 sps). We are going to use Bob Jones new rules Zoauve :Repique rules. http://repiquerules.com/

We are going to play the game as an FPW game with the French representing the Austrians. Each SP will be a brigade which will be represented by 2 wargame units on the table.

The second game is an action America with the French (5 sps) taking on the British (3 sps). The game will be fought as an ACW game with the Union taking the role of the French and the Rebels the British. The game will be played using Don Featherstone’s Horse and Musket rules from the Old School classic - the War Game. Each SP will be represented by a brigade of 2 regiments.

The third game is a much larger affair with a battle in Silesia between Russians and Austrians. Each side has 12 SPs. We are likely to use Piquet for this one but this may change.
Posted by Mark Dudley at 04:54 1 comment: