I have been away this weekend in East Ayton, near Scarborough, for a weekend of wargaming with the LAOW

I arrived on Friday and joined in an ACW game using a set of rules based on the Perry's Firepower set. 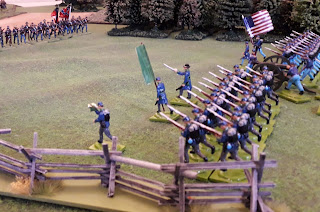 My first brigade looks across the field at a mass of yelling rebs intent on overthrowing our lines.

My second brigade had already been in action and retired to recover and reform. I managed to rally some of the men and re order the ranks. Before sending them forward into the cauldron of combat.

The Confederates were massing their third brigade to take the theimportant crossroads in the centre of the table. But for some unexplained reason the brigade failed to move forward any further failing 3 activations in a row.

On Saturday morning I put on a game using my classic Napoleonics using the classic Charge rules, with a few of my own amendments. The game featured the French facing a combined Anglo-Prussian army. Although out numbered the French had a central position and had the opportunity to beat the British before the Prussians could force a defile and capture the village in the valley.

The game played fast and furious with the Prussian initial attack on the village being thrown back. The Russo German legion slowly advance through the hilly woods. 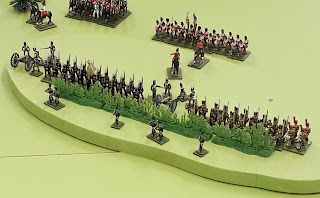 The French bombard the British, successfully destroy one of the guns, and slowly advance. The British launch the Lifeguards in an attempt to slow the French however the French stand firm and easily repel the British Cavalry. 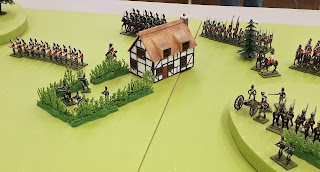 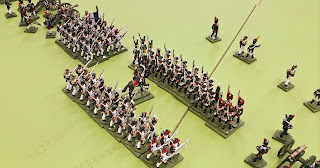 In the centre the British Fusiliers move forward and are supported by the Brunswick Cavalry who clash with a regiment of French Dragoons. The melee see saws backwards and forwards before both sides fall back to recover. 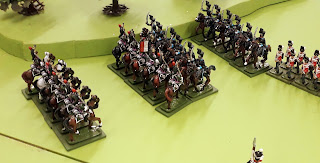 The British Infantry are still holding the ridge and with the French Infantry strength reduced Bonaparte decides to break off using his still intact cavalry to cover the retreat. 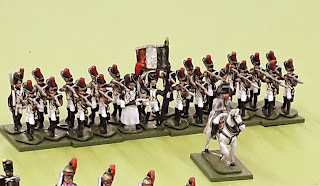 After a spot of lunch I spent the afternoon playing a 24 point game of DBN with Alex T one of the authors of the rules. The game was an 1813 engagement between Austrians and French.

The game was set up with the Austrian  attacking the French. The French had garrisonned a built up area and non linear fortification. As this was only my second game of DBN I decided to attack both. 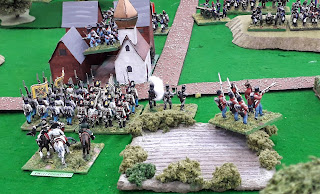 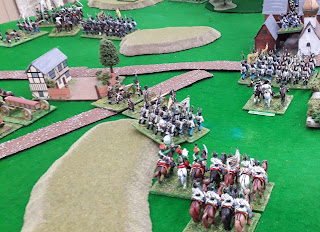 The dice gods were with the Austrians who successfully captured the BUA and NLF  and turned and destroyed the French right.  The French quickly reached their 12 unit loss break point and the Austrians claimed a victory.

Sunday morning dawned cold with a touch of snow. We gathered and set up the group game of shiny toy soldiers using the 'A Gentlemans War' rules.  In all we had 12 players and we werre split up with our own00 section of table and opponent. 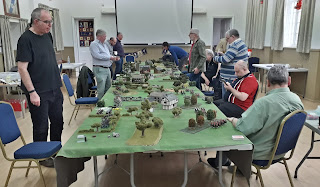 The game was set as an invasion of Albion by a coalition of various european armies, both real and imaginary. I was on the side of the invaders and was up against Mr H, seen here in the green shirt.

My forces deployed at the start of the game. 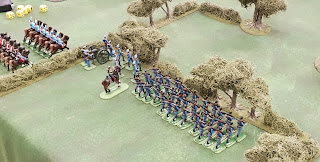 The British slightly outnumbered me so I decided to play a bit more defensively rather than my normal aggressive tactics. My brave boys take up their positions ready to pour murderous fire  on the British. 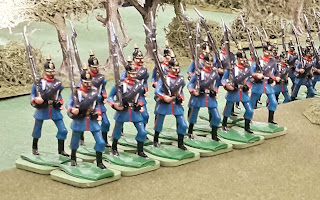 The Brotish lead unit of Scots win the prise for the best troops on the table with those rather natty looking trousers. 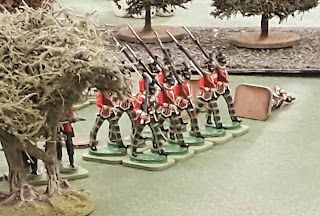 My initial volleys damage the advancing Scots and the Post Office rifles seen with the white pith helmets in the background. 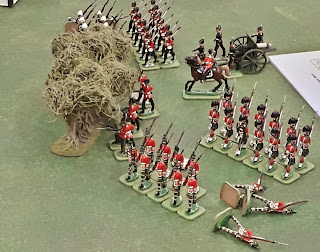 The British are however able to deploy their Infantry and either the extra numbers start to take a heavy toll of my army.
With the British cavalry successfully defeating my cavalry on the flank it was time for me to concede. 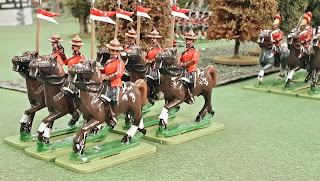 In all a jolly good weekend.

I am now down to working 3 days a week and should in theory have more time to spend on painting.

I have made progress on the first six Scots Greys. The horses and main colours are done and I now need to finish the detail and tidy them up. The full unit should look rather nice once I get them completed.

One of the reasons why these are taking longer is that I have got side tracked into rebasing my 15mm Napoleonics. This collection is hardly used and must be over 20 years since I first started this collection.

With my 20mm classic collection built around the battalion and used with battalion scale rules and formations I have decided that the 15mm collection should be used for higher brigade level games such as Blucher and DBN with one stand representing a unit.

This week I started rebasing on larger 80 by 50mm bases and rather like the way they look. I only had a few mdf bases of this size so I am now cutting my own from a piece of mdf I had using a Stanley knife. 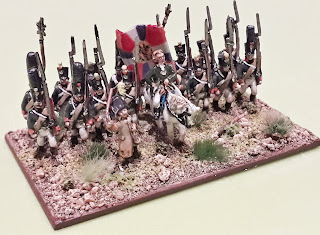 A Russian Brigade using AB figures. I have also gloss varnished these figures as it really makes the colours pop. 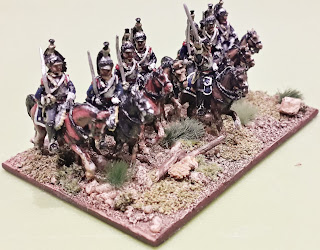 A French Cuirassier brigade again using AB figures.  AB are by far the best figures although I also have Essex, Old Glory and Battle Honours. 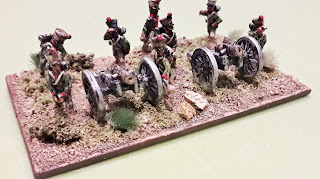 And finally an Italian artillery unit. I am unsure who made these figures but they required a little extra card board on the base as they are smaller than my others figures.