On the AMG forum there has been discussion on books on the Battle of Minden.

One of the books mentioned was written  by Howard Cole for the Knight's Battles for Wargamers. 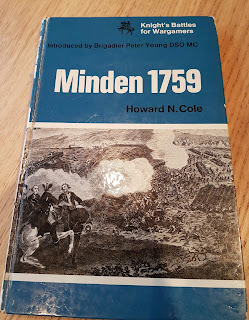 I bought a secondhand  copy many years ago for 50 pence.

Whilst flicking through the book I came across this paragraph written by Peter Young in the Introduction. It made me smile.

The battle of Mollwitz is one of the classic wargame battles. I have fought the battle on a number of occasions. 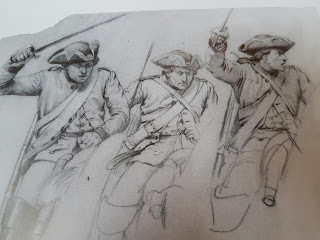 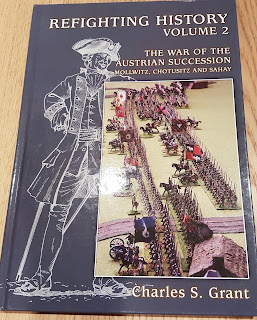 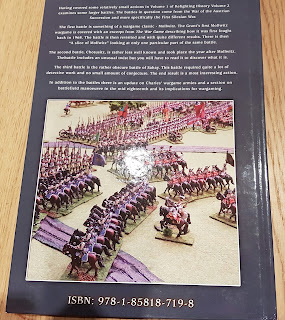 My challenge is that my only easily accessible surface is my kitchen table. While this is extentable to approx 8ft it is limited to a meagre 32 inches.

I am therefore now looking to play a kitchen table sized version of the battle using my 28mm collection. The rules will be The Wargame played using 1/2 scale measurements.

My plan is underway for Klien Mollwitz.

My Infantry units are 30 figures and Grenadiers 24. Cavalry are in 6 figure units.

So using the orders of battle in Refighting History I have distilled them down to the following. The ratio I have used is 1 infantry representing 100 and 1 cavalryman equally 150

It will be interesting to see if works.  If it does then I will see what other classics I can distill to the small table.

Labels: The War Game, WAS

Thoughts on gaming the SYW in 6mm

Firstly we used cms instead of inches. This worked very well with movement rates and ranges looking and feeling right. I used a 2ft square piece of mdf and this equated to a 5ft square table.  This means my humble kitchen table using 6mm will represent a 15ft by 8 ft table if using 28mm figures. Plenty of room to refight Mollwitz, Lobositz and Kolin.

The other point is that I can use my small painting table for small games.  My next game is set up and I plan to play this with my son Max tomorrow 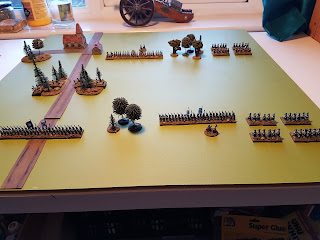 Secondly I had to adopt a number of amendments for the smaller scale chaps. I am not sure the Artillery stick and cannister cone is going to be work. I may try making some scaled down versions to see. For this game we used the artillery rules from 'Charge'.

Another considerstion was how to represent Officers and how to cause loses.

For light Infantry and Cavalry both are organzed in squadrons and companies of 6 figures. For every figure lost a die is rolled with the same 5 or 6 officer lost with 5 or 6 saving throw.

In melee is a bit more complicated. So here is an example. Two squadrons are engaged in melee - 6 figures a side.  4 melees sre fought as rankers vs rankers. The final 2 melees are officer vs ranker. If side loses its officer the unit is lost and removed from play.