Back in 1975 I bought some Barry Minot 1806 Prussians, from I think Ted Surens shop in Lower Sloane Square, to make into some Prussian Jager for my Charles Grant inspired gaming.  Having cut off the bayonets I started painting the figures based on the uniform in the old Greenwood and Ball booklet on the Prussian army.

As you can see I did not get very far. 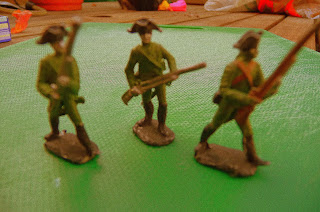 In the last 37 years these figures have been on my painting table, so to speak, and have followed me around the country as I moved from house to house. For the last 20 years they lived in a box.  I knew they where there.


Well its 2012 now and I thought it was about time I finished them up. So with no more a do last week I got them out of their box, added a RSM Officer to make up the numbers, and finally finished them off.
So it has take me 37 years to get them done  - from start to finish. 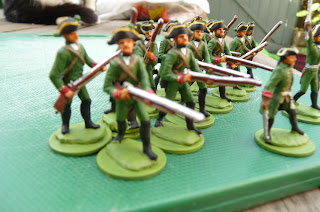 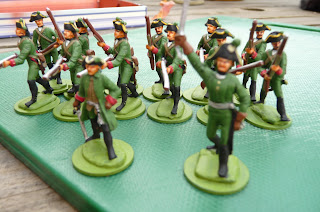 For a while now I have been wanting to paint some 1/32 -54mm SYW figures up for some Old School gaming.  With HAT now having the command figures available I decided to pick up a couple of boxes of the figures.

I have never painted figures this size before so I decided to have a trial go on 6 of the infantry marching figures.  I decided to base them on the Saxon army as they used Prussian style uniforms and  I wanted them in white.

Here a few shots of the finished (unbased figures) posing in my front garden as the weather is good today. 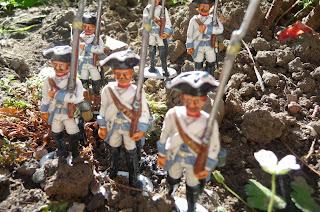 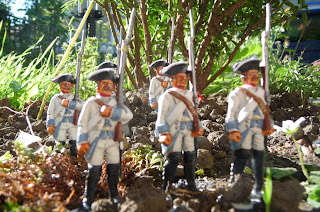 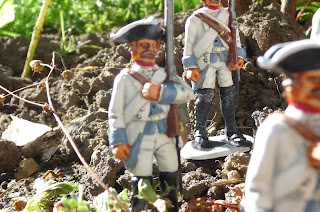 We have also starting using the excellent rules Maurice rules and are now embarked on a campaign (2nd game tonight) using my 28mm collection.  I built this collection some 12 years ago so I decided to give my Prussian Infantry a fresh coat of blue and revamped the bases.  The flags are home drawn using MS paint. They are here if you want some 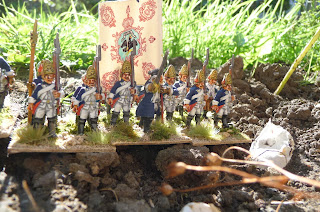 And finally I have been playing around with Magnetic basing with my OS Charge figures using penny washers and magnetic sheet. Show here are some Minden figures. One of the advantages of using washers is that if you different ranges (I have Minden, Spencer Smith , Minot, RSM95 and Jacdaw figures) is that the with washers you get a nice uniform base size. 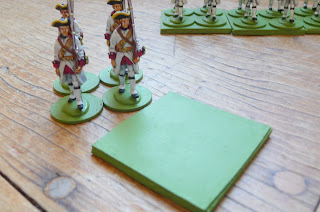