The War of the Austrian Succession - 1

As regular readers of this blog will know early this year I moved house and as a result no longer have my permanent wargame table.
In the next few weeks I will be able to have a temporary 6 by 4 table available to resume gaming. It's smaller than my old 10 by 6 I used to have in my basement.
So my thoughts are moving to what type of game I can put on this temporary table.
With my son Max showing more interest I hope to do more gaming with him.
I have decided to set up a solo campaign to generate smaller 18th Century battles to game.  Many years ago I ran a Sport of Kings campaign from the Warfare in the Age of Reason rules. 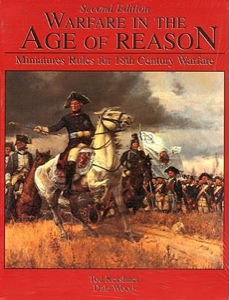 Reading the Campaign rules and looking at the map I decided to give it a go.
The following show the maps which I found here.
http://home.earthlink.net/~mikedemanaphotos/SportKings/SportMaps.html 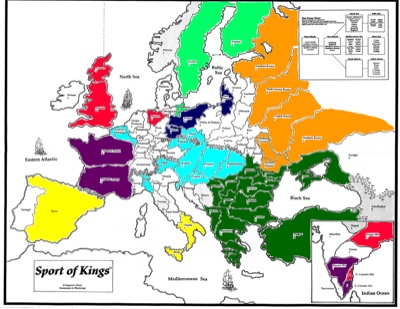 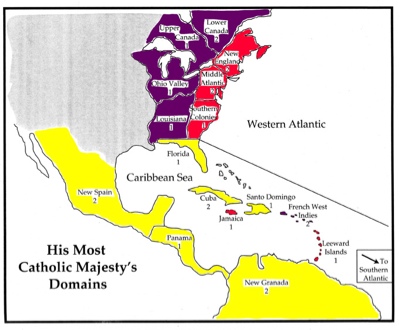 I have decided that I would leave out Turkey as I don't have any Ottomans.
So the scene is set. It's 1740 and I am ready to go.  I decided the following political stance for each nation as follows.
Sweden: unaligned but with a burning design to avenge the defeat at Poltava and seeks to take on Russia. Will cooperate with Prussian in this objective. I may well use my GNW armies for battles against the Russians.
Russia: Apprehensive about Swedish intensions Russia will keep a large part of its forces covering this threat. The Russian however will look to seek territorial advances in the Baltic and Poland.
Prussia: Will look to expand whether it can with Austria and Poland it's key areas. Has a non agression pact with Britain over Hanover but is distrustful of British intentions particulary if they intervene to support Austria.
Austria: Austria only friend is Great Britain. Threatened by Prussian in the north and the combined Bourbon Alliance (Gallispan) in Italy and the Low Countries things look tough.
Great Britain: Brittania rules the waves - or does it ? The Gallidpan navies outnumber the British. Holding out in North America will be crucial and the  Med may be a side show. Hanover is also    a concern as is French action in the Low Countries.
France:  Too many options not enough troops.  An alliance with Spain helps. France will work with the fellow Bourbons  in putting pressure on Britian in North America and the Carribean and in Italy against the Austrians. France main thrust will be in the Low Countries and a secondary option in Rhine.
Spain: The Spanish thrust will be directed towards Italy via France however the North American and Carribean will see both land and naval forces committed. The Spanish will look to control the Mediterranean Sea to support its Italian objectives.
So the scene is set. Next I will set up the starting forces ready for the first Campaign moves.
Posted by Mark Dudley at 10:40 4 comments:

This weekend I spent an excellent time with 20 other fellow members of AMG.
The event was organised by Graham Cummings (of Crann Tara Miniatures) and  his organisation made for a smooth event.
There were 4 games put on by various members and these included Soor, The Sudan, Great Northern War and Chotusitz.
The Chotusitz game was put on by myself and Steve Metheringham, who supplied the bulk of the figures.
We used Piquet Field of Battle and was the first time I had used them in over 5 years.
In all we had 7 players over the two days.  On Saturday the Prussians were able to hold off the Austrians long enough for Frederick Infantry to arrive and using their superior musketry defeat the Austrian Infantry.
On Sunday the Austrian cavalry dominated the Prussians so much so that Fredericks Infantry were unable to  stave off the final combined attack of the  Austrian Infantry and Cavalry.
Here are some pictures of the games. 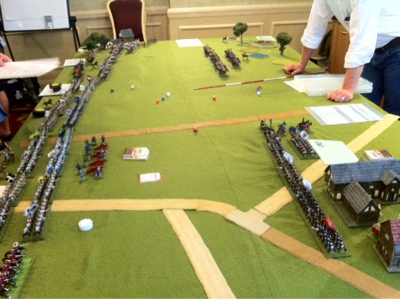 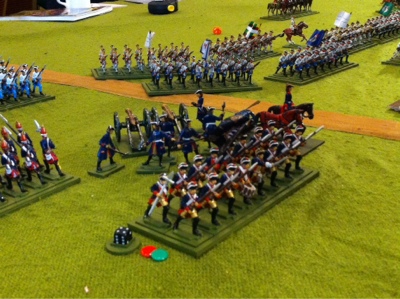 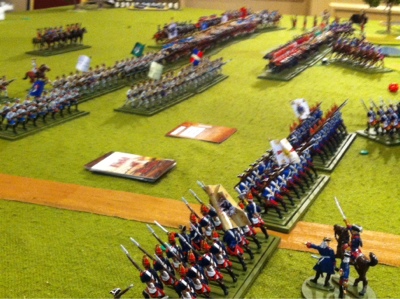 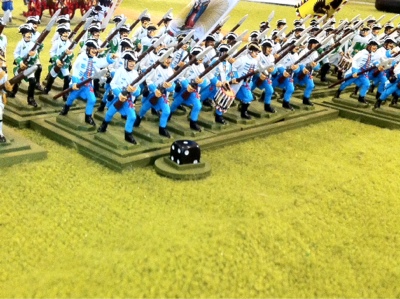 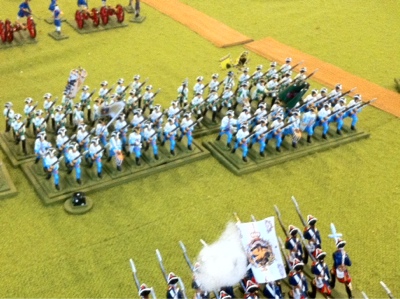 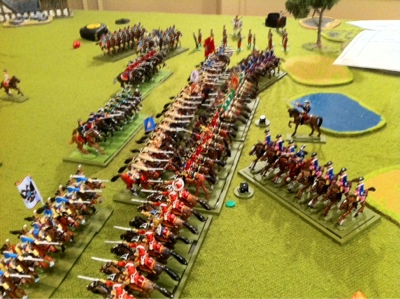 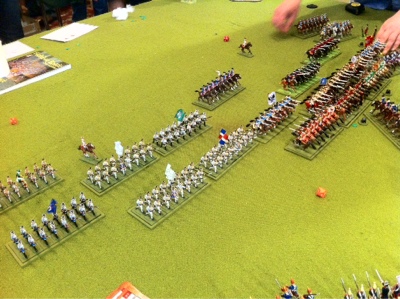 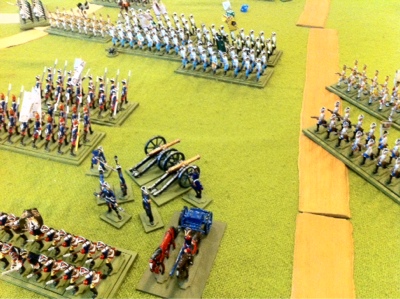 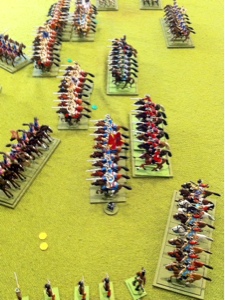 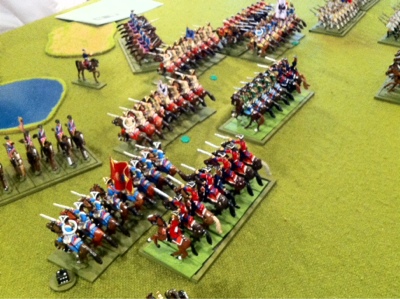 Some pictures of the other excellent games available over the weekend. 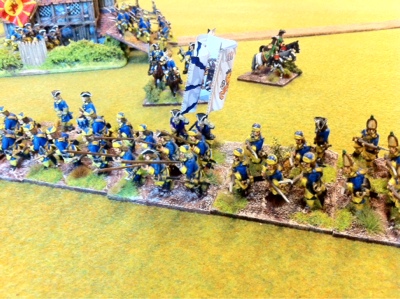 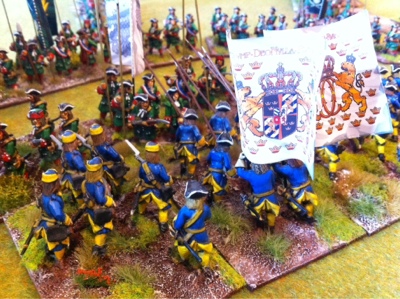 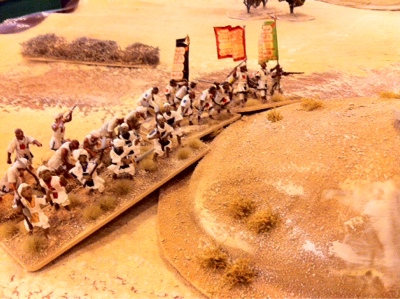 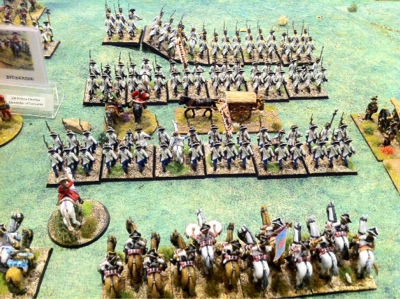 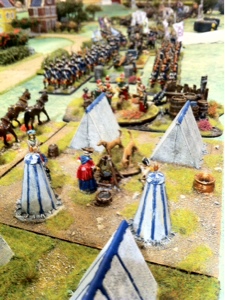 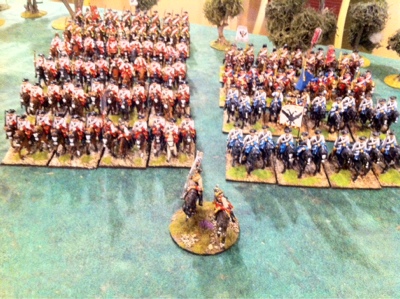 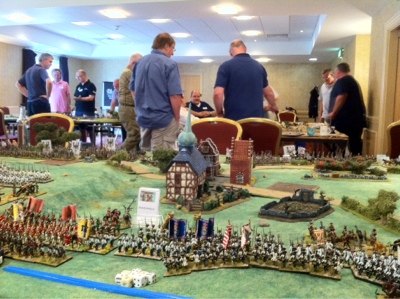 Having moved earlier this year I now have no permanent wargame table . One of the options is to use the garden lawn.
After mowing the lawn this afternoon I decided to set up a few ACW troops to see how it looked. My 7 year old daughter helped pose the figures and took a few photos. 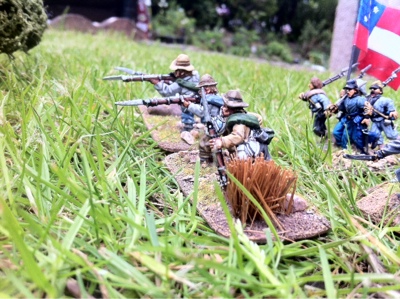 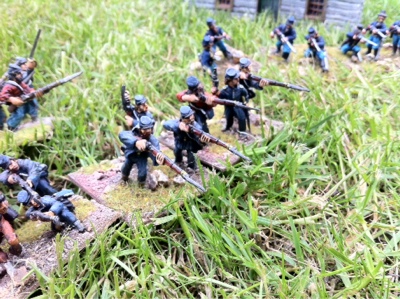 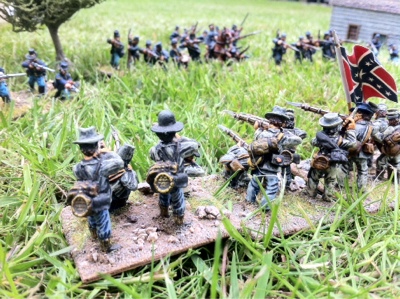 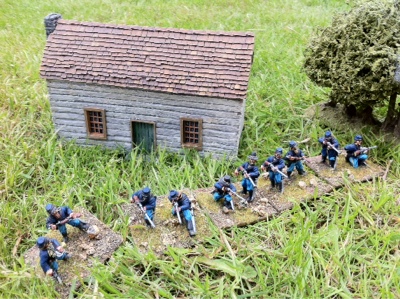 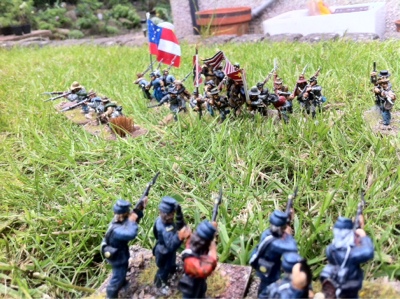 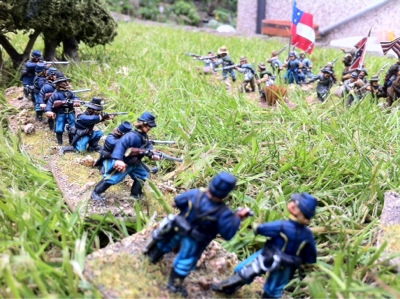 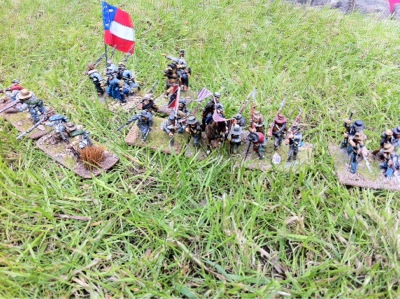 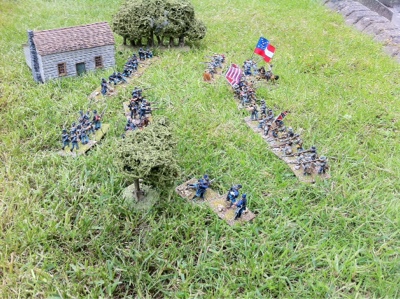 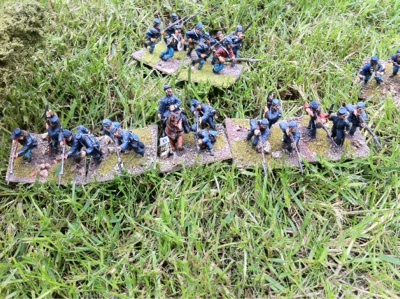 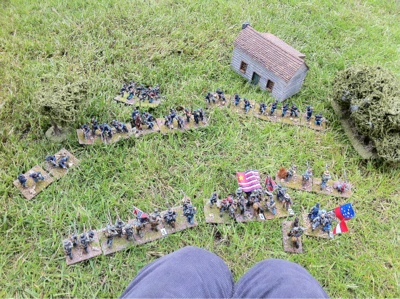