Another day, another game of solo DBN. DBN are perfect for my solo gaming now that I have retired. Today I am doing Sacile.

For this game I gave both C in C a -1  on their Cap dice. Each side has a sub commanders a -2 on their Caps dice.  This reflected the below average command capability of Eugene and Archduke John. This hindered the French most as at critical moments they often only had 1 Cap to play with.  The French were further hampered by the numerous streams which bisected the position and are treated as bad going.

The French are the attackers with Austrian defence based on 3 villages (Non linear fortifications in DBN terms).  Each village captured by the French counted as an Austrian unit destroyed.  The French have 19 units and the Austrian 17 units.  Victory goes to the side that eliminates 8 enemy units.

The set up as seen  from the Austrian side. The Austrians are set up in defensive positions with their Light Infantry garrissioning the 3 villages. The bulk of their cavalry is on their left.  The French have concentrated on their left and centre and plan to attack the 2 villages in this sector before the Austrians are able to redeploy to meet the threat 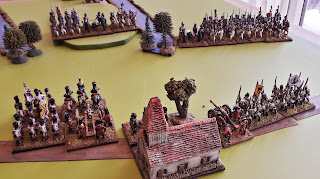 The French advance on their left starts off well and is initially well coordinated. The Austrian lines look solid but will they hold. 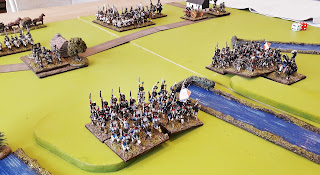 The French support the attack in the centre whilst holding back their right. In DBN you never have enough Caps to do what you want so it is better to have a plan and stick to it. 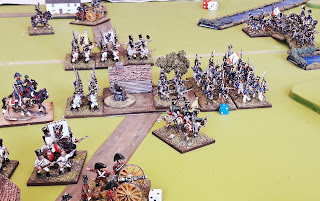 The French attack in the centre initially captures the village however a swift counterattack by the Austrian recaptured it only for the French to attack again forcing the Austrians back. A final Austrian attack is fought off and the French are able to Garrison the position but at a high cost in French lives. 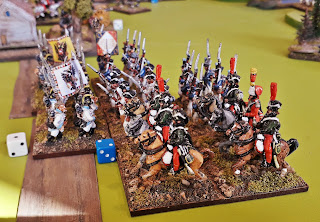 On the left the French take casualties but they push forward supported by light cavalry.  In the melee the French column bonus proves decisive as they destroy the Austrian line and in doing so recover a hit which recovers them from shaken. 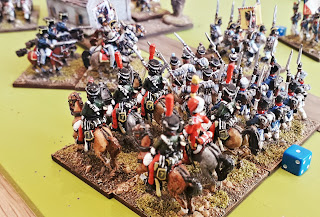 The victorious French push on however the Austrian cavalry have arrived in the nick of time. The heavy cavalry charge the advancing infantry with their lights taking on their French counterparts. 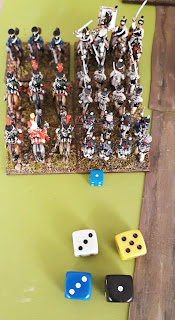 The Austrians fight the heavy cavalry melee first. The French roll and are un prepared. Each side is therefore on a base 3 as the French get no benefit for being in column against cavalry. The Austrian roll a 5 and the French a 1. The French are doubled and therefore destroyed as they have been attacked by heavy cavalry.  As the leading unit has been destroyed the second unit in the column is also eliminated.
The Austrian heavy cavalry breakthrough onto the French light cavalry who nevertheless throw back the Austrian cavalry.  The French have now lost 7 units and the next turn the Austrians, although themselves losing 7 units, are able to eliminate one more French unit to secure a 8-7 win.
The Austrians are now 2 - 0 up my 1809 campaign.
Posted by Mark Dudley at 07:23 No comments:

I am using DBN to refight the 1809 campaign. The small game table (2ft square) and quick games are perfect for solo gaming on a kitchen or, when the weather is good, garden table.
I am going to be using my old 15mm collection which has been rebased and with new flags issued. The games are going to use the scenarios available for Command and Colours with a bit of tweaking here and there.
For my first game I selected the clash at Pordenone in Italy. The Austrians under Archduke John have invaded Italy which is defended by Eugene Army of Italy. This is a fairly even game with 11 units a side with Austrians attacking. Victory goes to the side which eliminates 5 units. If the French lose Pordenone it counts as an eliminated unit.

The Austrians push forward their cavalry on the flank supported by the horse artillery.  The French are out numbered so give ground before the weight of numbers reduces the French cavalry to a single unit. 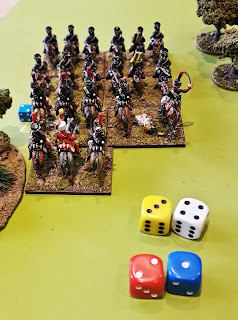 In the centre the Austrians advance 2 light infantry units and are able to quickly inflict loses on the French defending Pordenone.  French light cavalry un successfully attacks the Austrian artillery supporting the attack on Pordenone.

The French are losing so they launch a flanking march of Infantry and artillery which is slowed down by an Austrian Light cavalry unit. With the scores tied at 4 units lost the Austrians are able to gain one more hit on the French infantry defending Pordenone removing it from play and giving the Austrians a 5-4 victory.

This was my 3rd game of DBN and my first solo. I had to check the rules a few times but the game took about 1 hour to play.
Posted by Mark Dudley at 06:21 2 comments: