Its is a bright spring morning as General De Cassoulet mounts his horse. He can feel that today's work will be hotter still as the Imperial troops under his command represent some of the Duchy of Calvados finest troops not to mention the presence of the Royal Field Kitchens.
The advance begins with the Ducal forces moving towards the bridge over the River Holger and the town of Erikssonville. Two companies of the Royal Boursin are followed by the Grenadiers de Calvados 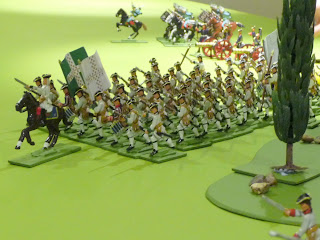 The Livarot are ordered to secure the ford and attack the small hill north of the town.  General Cassoulet
young ADC is keen to earn his spurs in his very first action an opens up with the heavy artillery against the Electoral artillery south of the town before it can fire on the heavy infantry columns. The dice roll a hit - the dice is re rolled for effect - a 6 - the electoral gun is bowled over with the very first shot of the game.

Although I am using The War Game rules I played the artillery rules from Charge  as these are simpler and I don't have any of the artillery sticks and cones made up. 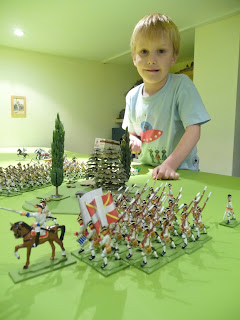 As the Imperial troops advanced the leading regiments form line. The Royal Boursin break into 2 companies  creating a nice gap for the Grenadiers to charge across the bridge.  ﻿ 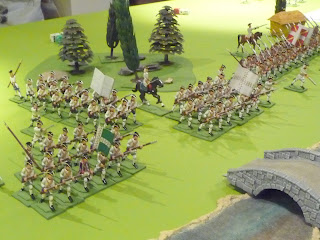 Although it has lost an officer from the first round of artillery the Livarot form line - an imposing sight for the company of the Liebgarden depending the hill - who open fire at long range supported by canister from the other electoral gun situated on the hill. This combined fire was to dog the advance of the Livarot who reach 50% casualties and turn and fall back in disarray.  ﻿ 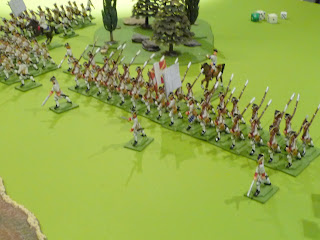 With the Livarot retiring the fight in the centre reaches a crescendo. The Royal Boursin and Sbrinz trade musketry across the River with the Imperial guns supporting the attack.  ﻿ 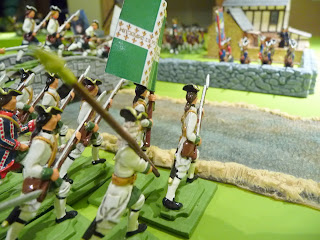 With casualties mounting on the Royal Boursin General De Cassoulet orders the Grenadiers forward. Storming across the bridge.... 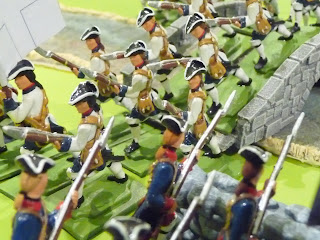 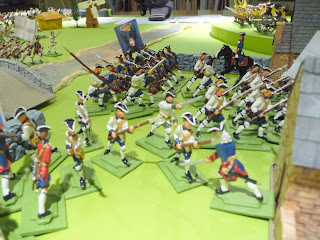 ......the Grenadiers melee the Sbrinz and after a short fight force them to turn tail and retire.

The Sbrinz only lose 2 men but with the grenadiers only losing 1 giving victory goes to the Imperial forces. 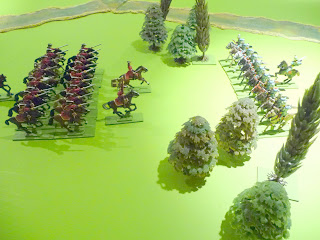 With the village taken the Elector of Fustenberg-Lederhosen finest troops finally arrive - the Dolcelatte Dragoons. They face a smaller number of then the lighter Bechemal hussars across a small field. 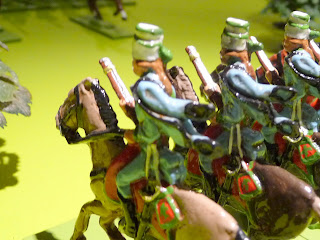 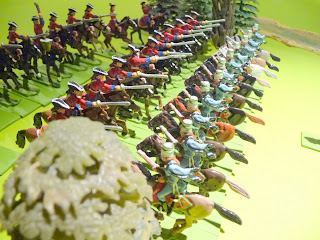 After a swirling melee of trust and counter thrust the Dragoons emerge victorious sending the Hussars packing. With this flank stabilised and with single company of the Leibgarden still full of fight the Calvadorian forces decide that the delights of Holger are more to the taste that the fields of Mars.  The action is over with both sides claiming victory. 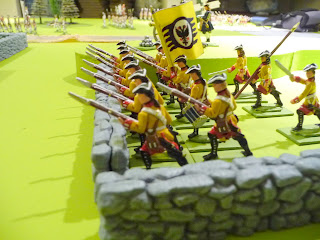 My son Max played the game to completion and enjoyed rolling the dice and knocking over the soldiers.
Posted by Mark Dudley at 02:37 9 comments: