My impending house move means gaming at home will use a small board on the kitchen table.  Whilst I can still use larger figures I will need to use smaller figures for those bigger games.

I have painted a few 15mm however I have often thought I should have a go at some Pendraken 10mm SYW.  So I ordered a couple of packs of March Attack Infantry to see what how they painted up.

Here are a few images of my first Austrian unit - the First battalion of the Waldeck Regt.

I have based these figures 6 to a 2cm square base. 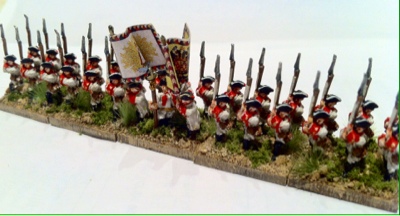 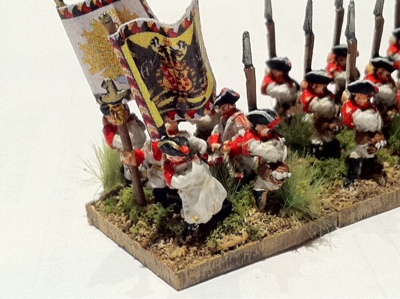 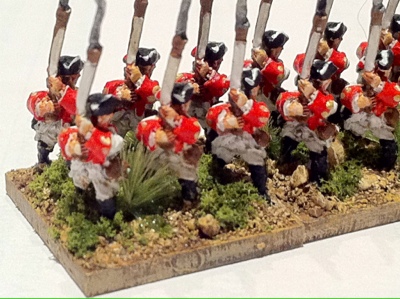 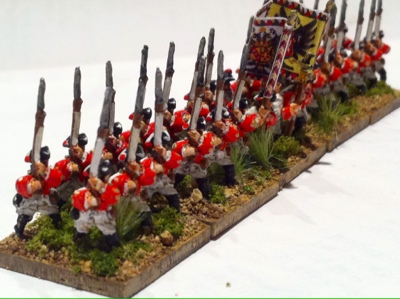 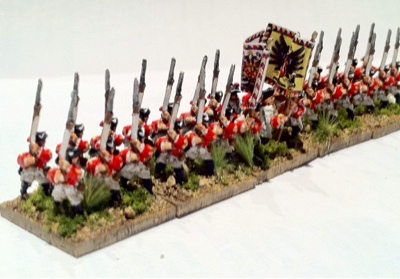 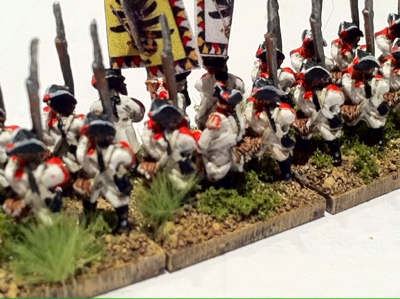 I am looking to build up some smaller scale armies for quick pick up games to play against my son on the kitchen table.

I already have some Napoleonic in 15mm  however the lure of the 18th Century is too much of a pull. I have a few old SYW Minifig Figures plus some Dixon Marlburian Cavalry, left over from the collections sold many years ago, which can be used at a pinch.

Well I started painting some Blue Moon  French 15mm figures however I wanted too create big battalions a la Grant (48 figures, 4 officers and a mounted CO).  Digging around I found 8 Austrian Minifig Grenadiers and some Lanchashire games French to bring the numbers up to full strength.

It's been a while since I painted 15mm however I found them easier to paint than I thought.

Anyway here they are with the full unit deployed in line. In all the unit is 24cm, or over 9 inches, in length. A unit this size will be interesting to move and maneovre on the table top. More thoughtful planning and positioning will be required to bring these into action. 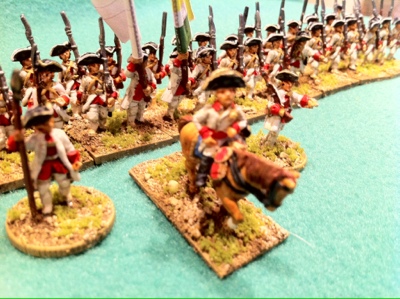 In addition I have renovated these old Minifig Austrian Cuiassier. Both these units will form part of my Imperial Army.

These are organised as 6 figure squadrons with an officer type. 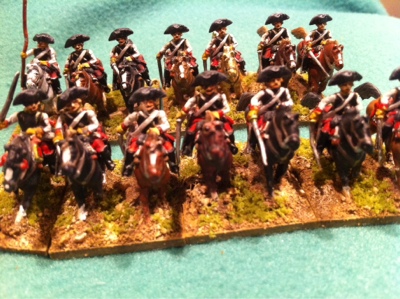 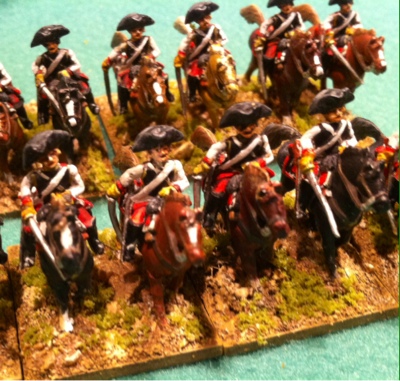 Next up will be some renovated Minifigs painted as the Saxon Leib Garde (2 companies in Mitre and 2 in Austrian style bearskins). These will be organized as a converged Grenadier unit with 32 figures, 6 officers and a mounted Officer).

First game of the year is a small affair using my classic Spencer Smith collection.  Each side has 2 infantry units, a cannon and a cavalry unit (I used unpainted figures for these).
My opponent for this little affair was my son Max who commanded the Union forces.
The rules used mix of Charge and the War Game plus some of my own rules. 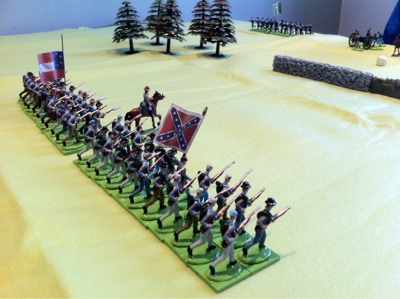 The Confederates mass their Infantry in the centre, 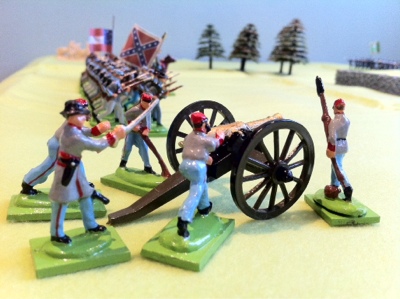 With artillery support. The rebel cavalry are massed on the right close to Cringle Wood. 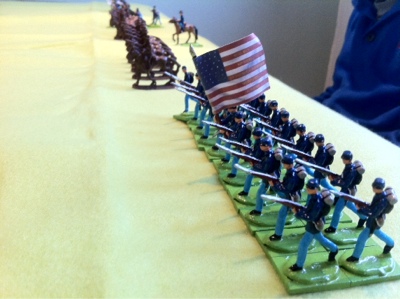 Max deploys his Federal forces with his Cavalry and artillery in he centre and am Infantry unit on each flank. 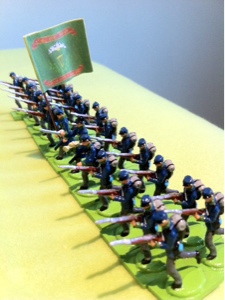 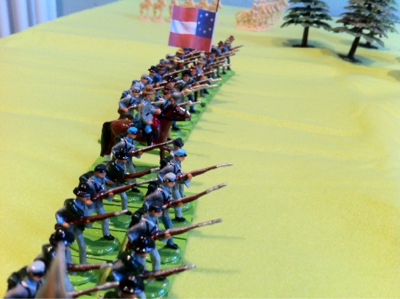 The Rebel battle line moves forward with their battle flags flapping in the early morning breeze, 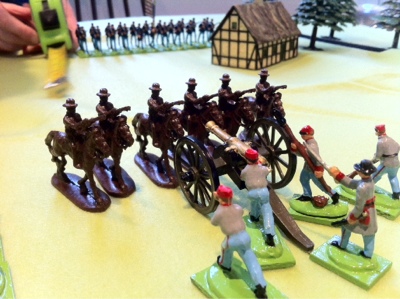 Max is a chip of the old block as he quickly launches his first cavalry squadran against my artillery who are only able to remove one figure as the cavalry close and ride down the gunners. 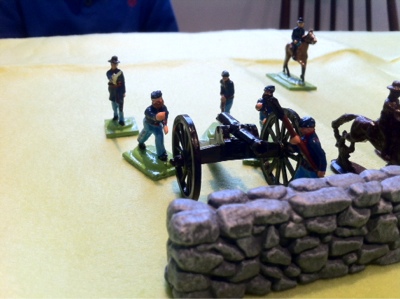 Max quickly makes the stone wall his and deploys his artillery supported by his second cavalry squadron. 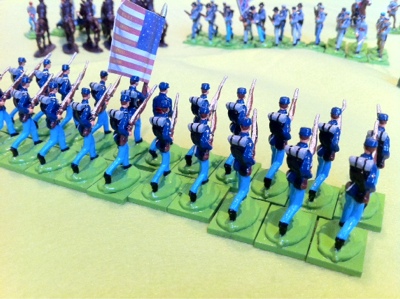 In support of his cavalry he moves his infantry against the Confedrate Infantry. 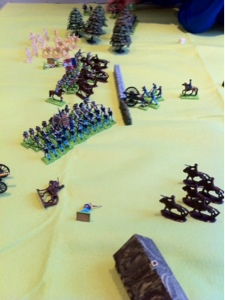 Panorama of the battle. 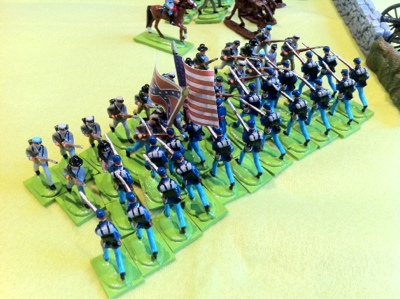 The Union infantry move into close range however the Rebels hold their nerve and let rip bowling over 8 Federal Infantry.  The subsequent morale test is failed and the Union turn tale and skedaddle. This unit fails subsequent rally rolls and leaves the table. 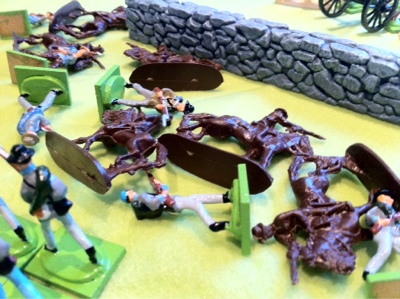 The devastation in front of the stone wall where Union cannister fire and a failed Union cavalry attack leave the ground littered with grey and blue soldiers. 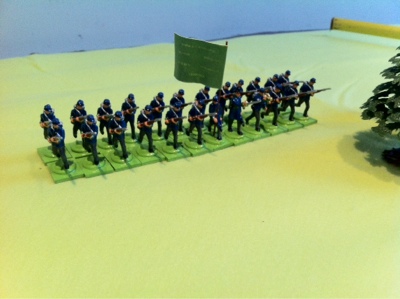 The final stage of the battle sees the Irish unit take on the 2 weakened Rebel regiments. 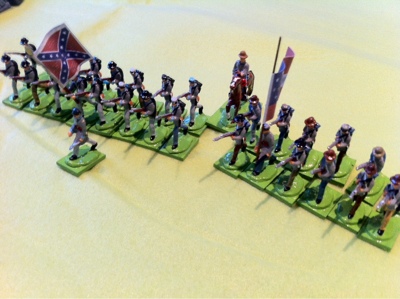 Although outnumbered the Irish rout one of the Rebel regiments however with Rebel cavalry attacking their flank and rear they are forced back into Cringles Wood and then rout from the field.
Max had a good time and I think I am going to have to paint some more of these figures up for the next game.
Posted by Mark Dudley at 08:18 6 comments: