I finished the first batch of 9 figures this morning.  Second batch are being cleaned up.  I hope to have the full unit ready for inspection on June 18th. 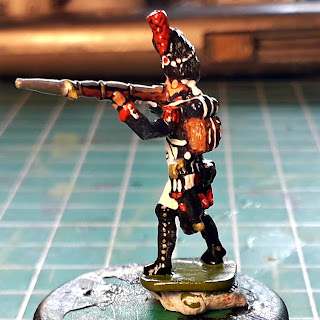 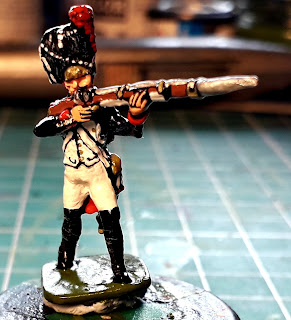 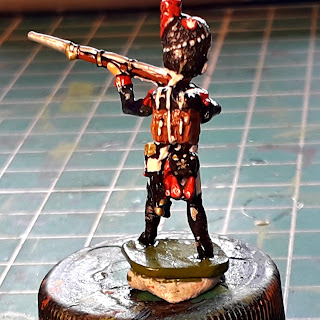 And all 9. I was worried about doing the gaiters black but I think they have come out Ok. They do look more 1812-15 with black gaiters. 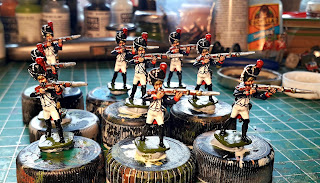 I made some progress on the first  figures of my Old Guard unit. I need to crack on with these so I can get them finished before Strykers unit of Old Guard. See his latest blog post.

He has a head start. I am targeting to complete the unit on the 18th June.

I have got some painting done today 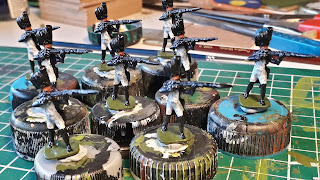 These are all JC recasts and are cast  from one on my original figures. I am painting these as later period 1813-15 and I am going for Black campaign style gaiters.

And now for a mystery, well a mystery to me that is. I have a French Sapper figure who I assume is an Old Guard chap who will be part of my unit. But who made this figure. The base was miscast, hence the Milliput I have added, but does look a bit Hinton Huntish. 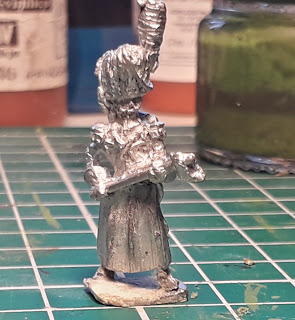 I have check Clives blog and listings and there is no Sapper figure listed. I thought he made be an Alberken but their Guard Sapper is a different pose. Does anyone have any ideas as to who made the figure.

I have finished my unit of Der Kreigspielers Lutzowers. DK ref 122. The command was a made up from other figures and I not sure of their providence. The drummer was a copy of a French Drummer with a Prussian head. He required a fair bit of cleaning up before painting. The Officer is a Hinton Hunt PN1 but possibly not original. The standard bearer looks like a David Clayton casting PN11 Garde Standard bearer but without he plume. All 3 command figures needed Milliput Litweka adding. 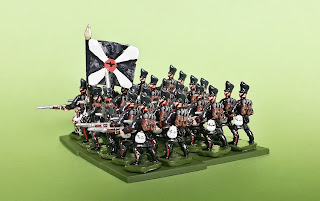 The DK Lutzow figure has French style backpack rather than a Prussian one. 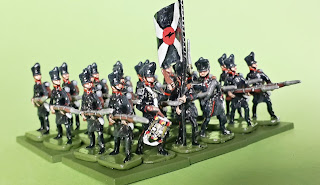 I painted all 24 figures in one batch as I thought as they are in Black it would be easier. Now I am not sure about this and will revert back to smaller batches. 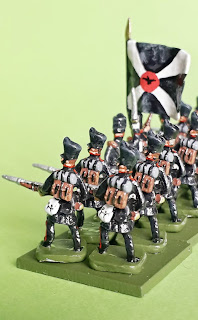 I based the flag on a image I found on the Lutzow Freicorps Website. I am not sure about is authenticity but a Black flag does complement the uniforms. 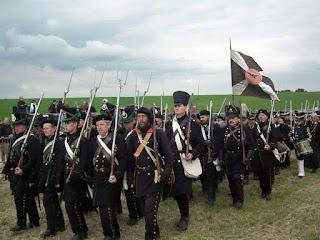 To support my Lutzowers I am going to add some old Kennington Austrian Jaeger as a company of the Lutzow Tyrolian Jaegers in Grey and Green.

After that it these boys next.

This unit will include 11 of my original Grenadiers I bought from the Hinton Hunt shop in Camden Passage. The rest are more recent recasts. Unfortunately I don't have a Grenadier drummer however I will add  a Sapper instead.
Posted by Mark Dudley at 07:20 14 comments: