Having seen Wellington Mans Prussians in black I decided to have a go at Lutzows Lancers part of the 6th Uhlans.

I used original Hinton Hunt Prussian Landwehr PN39. These have taken a couple of weeks to do and just need a final tidy up before two coats of gloss varnish before basing. 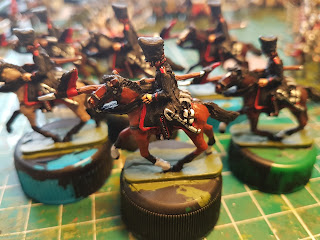 The gloss varnish will bring these figures to life. In my next post I will do a photo comparison between a figure in Matt and the final Gloss finish. 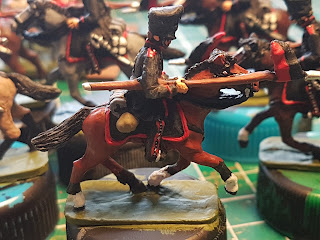 In other news.  This week I received some British Fusiliers from Matt in New Zealand as part of an exchange for some of my  Prussian Dragoons. These reinforcements will allow me to field 2 full 24 figure battalions in my Fusilier brigade and create a 6 figure unit for the combined light companies. 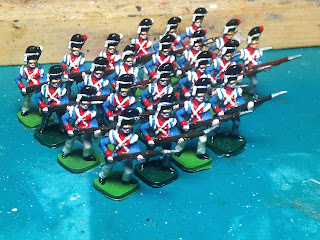 These look to have been painted as Bavarians. I had originally thought of stripping the figures however I think I will use the repaint option to match them to the the ones I got from Oxfam.

As part of my recent Hinton Hunt Prussian Cavalry reinforcement Iain also included a gift of a box of 20mm Prussian Landwehr figures. 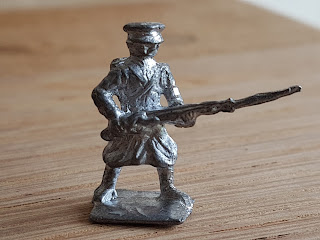 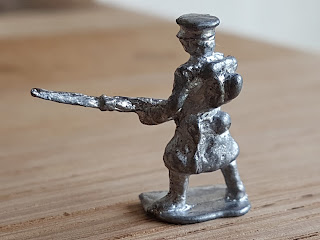 The figures look to be home cast as the bases are not complete. They are not Hinton Hunt but what are they.

The style is similiar to early Alberken/minifgs however I am unsure if either of these companies produced Prussian Landwehr.

Looking at the equipment I wondered if they could possibly be  Crimean Russians.

Perhaps I should paint one to see how they come up.
Posted by Mark Dudley at 01:31 5 comments:

I had not planned on doing any British in my classic napoleonic collection.

However having got some Fusiliers and a General Hill from Oxfam and various Garrison and Higgins figures it was only natural  that I needed a Wellington. 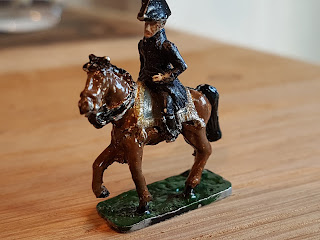 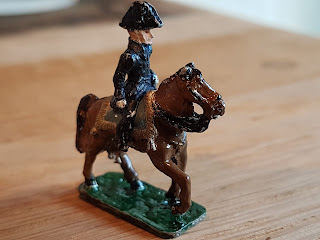 I now have Napoleon and Wellington originals and a JC Blucher in my lead file.

My 6 Prussian Lutzow Lancers are underway and I hope to get more done this weekend.
Posted by Mark Dudley at 10:49 3 comments:

Before my summer holiday I picked up 32 original Hinton Hunt British Fusiliers at Oxfam. See previous post for details http://ilkleyoldschool.blogspot.co.uk/2017/07/british-fusiliers.html?m=1.

The figures were reasonably painted so I decided to do a paint renovation. This weekend I finished the renovation and basing. I now have a full 24 figure unit plus 8 figures towards a second unit. Fortunately JC has British Fusiliers in his recast range although I am going to have to do a head swap to create standard bearers. 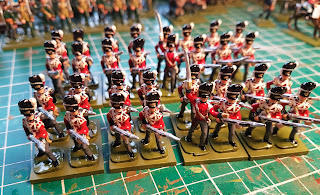 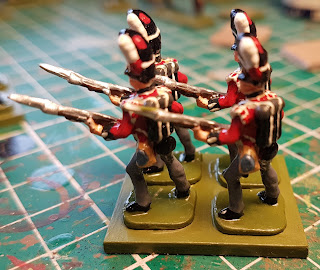 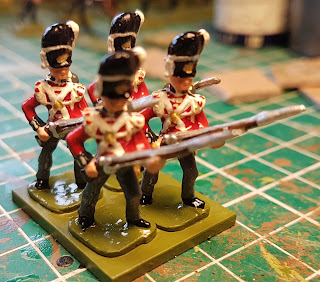 So on to my next unit.  I have recently been able to add 10 Prussian Landwehr Lancers (PN39) and 17 Prussian Dragoons (PN81) courtesy of Iain aka Essex Boy. These are original figures and very nice too. 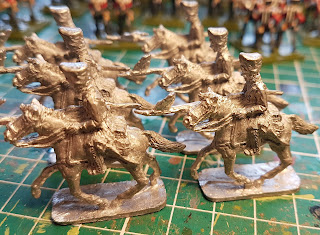 I paint cavalry in batches of 6 and the first lancers are being cleaned up ready for painting. These figures are crisp and need a little work with a file.

I am going to paint these as the Lutzow frei korps element of the 6th Uhlans. They have black uniforms and red piping and should look good with a gloss finish.  One thing I am not sure of is if they used black horses but even if they did they might just be a bit too much black. 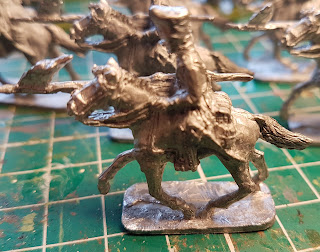 In other news yesterday I posted some original Hinton Hunt figures to JC to use as masters for his recast range.  These are a mixture of my original figures purchased in the early 70s from the shop in Camden Passage and others I got from Oxfam. The figures sent are:-

John recast list has expanded recently and has around 230 recast Hinton Hunt figures listed. It is now possible to create whole armies from his range.