My small ebay purchase arrived today. I now have an original Hinton Hunt to command my French forces. 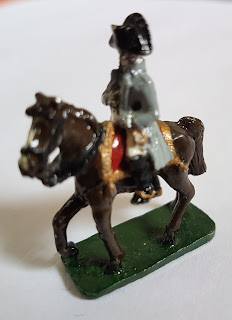 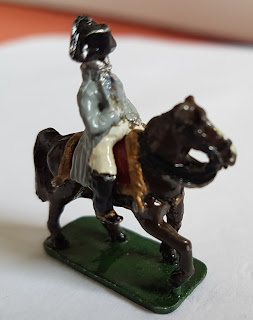 He has been partly painted and should clean up easily. The horse has been painted brown and not as Napoleons Grey Marengo 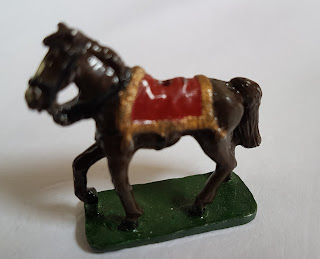 The mystery is solved. The horse code on the underside of the base is BNH10. A British horse and indeed the horse used to mount Wellington. 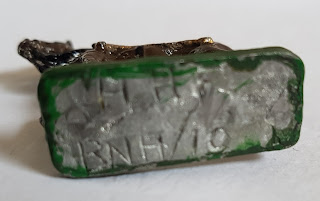 So my Napoleon is riding Copenhagen. Perhaps the previous owner modelled this on an alternative history and instead of Napoleon losing Waterloo where his horse, Marengo was captured, he wins and captures Wellingtons horse Copenhagen.

A classic Napoleonic pose shows the horse furniture in detail. 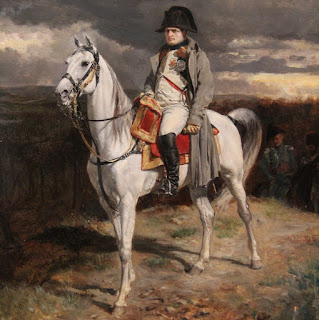 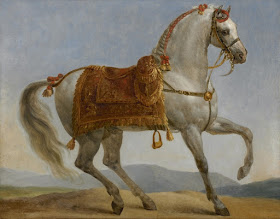 Anyway I will strip both the horse and paint as Marengo.  A FNH10 horse may turn up in which case I could always remount Le Tondu
Posted by Mark Dudley at 08:55 5 comments:

I have been reading about Matt's collection on the Hinton Spieler blog and how he has completed Phase 1 of his collection.

Well it seems like a jolly good idea if I recorded my immediate plans for my classic 20mm collection.

For the allies I plan to initially complete the following units.

Hungarian Infantry bttn. This will be made up of the following figures.

I need some extra figures for this unit.

I will convert the drummer and officer figures to line command either by head swap or milliput.

PN81 Prussian Dragoon raised sword * 12 (JC recasts). I will try converting a standard bearer and bugler from these figures.

This unit will be formed using my original Minifigs figures bought from BMW Models in Haydons Rd Wimbledon. The links below show images of these figures from the Lazy Limey blog. They are a bit more staid compared to HH figures but, in my opinion, are compatible with HH. 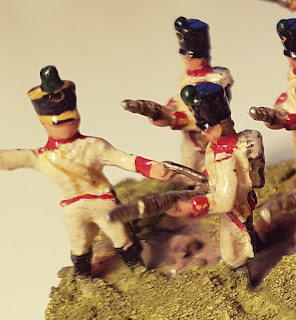 For some reason I painted these as Austrians. A folly of youth no doubt.

FN16 French  Advancing * 20. There are images on lazy limeys blog.

I will need to add a couple of figures to this unit. I have a Douglas Voltigeur standard bearer I can use for one of them.

I have the basic starter figures to form a cadre for this unit.

FN5 French Infantry charging * 11.  5 of these figures will require repairs for broken muskets/bayonets. Fortunately JC also sells muskets which I will use to make replacements.

FN315  French elite Hussars with swords. * 12 (JC recasts). I will paint 2 squadrons from different regiments to create a composite unit.

I also have some mounted officers including a Minfig 20mm Murat, Blucher (PN6), French Mounted Officer (FN224).  These are JC recasts

Finally no collection would be complete without a Napoleon (FN350). I have just bought one on ebay and it looks to be an original.

I am sure I will procure more in the coming months. I just need to crack on with the painting.
Posted by Mark Dudley at 12:40 3 comments:

I have prepared my next batch of Hinton Hunt figures. This time I am doing a squadron of 6 French Elite Hussars (FN 315) mounted of FNH7. These figures are available from John Cunningham's recast range.

Similiar to original HH figures there is bit of flash to clean off but they do come up rather well. 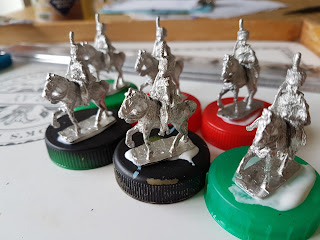 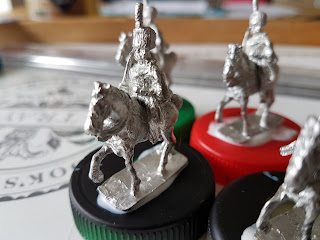 I have decided to organise my classic Napoleonic collection on the same lines as other Hinton Hunt collectors. This means infantry units of 24 figures and cavalry with 12.

What I have yet to decide is the rules I am going to use. I have a number of choices and thought I would share these.

Firstly there is the timeless classic Charge by Lawford and Young. 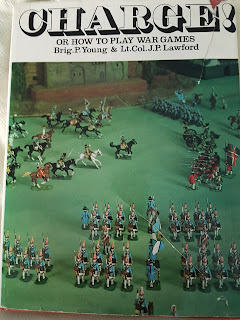 These rules, although identified with Imaginations and the seven years war are really more Napoleonic than is at first apparent with the use of skirmishers and rules for squares. As the cover jacket states these rules are for 1756 to 1815 confirms this. 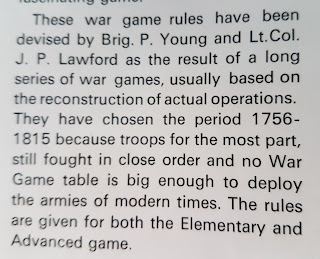 These were the first rules I used as a youngster and I have a particular fondness for them.

I also have Charles Grant Napoleonic rules and again these are aimed at the big battalion. 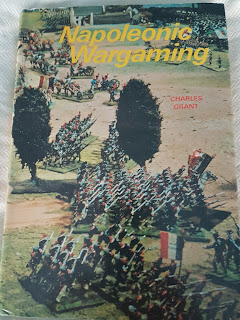 Another set of rules I have are those published by Bayonet publications. 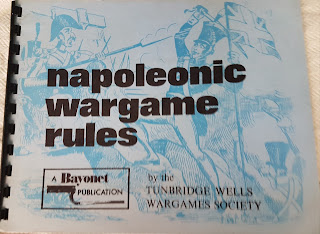 These rules seemed to be based on Donald Featherstone classic Horse and Musket rules from War Games.  I rather like these rules. Here are a few example pages of the rules. 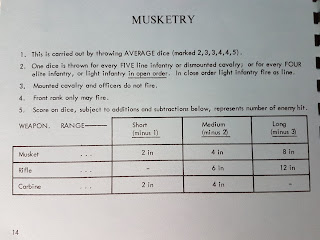 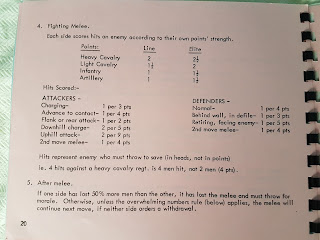 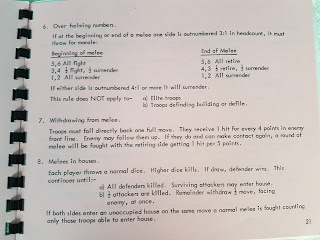 Another set, Musket and Marshals,  are those available from the Hinton Vintage Figures blog

I also have my an old copy of the Napoleonic Rules by T J Halsall.

The final choice is to write my own using bits and pieces from all the above plus a few of my owm thrown in.

I have finally finished the first 12 Hinton Hunt Hungarian figures. Doing Hungarians required a fair bit of patience doing all the black lining around the white belts and straps as well as the knots and braid on the trousers.  I learnt a few lessons on how to approach producing the classic look. 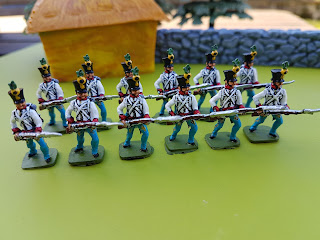 I have not decided on base sizes or the material to use.  The sizes used by others who collect these figures is 40 by 30mm for 6 figures. This gets a bit more complex for single figures on 13.3mm and 26.6 for 2 figures. My inclination is to use Imperial measurements as this is seems right for figures of the early 70s that cost a shilling at the time if you bought 100 figures.  So I am thinking 1.5 inches instead of 40mm and cavalry on 1.25 instead of 30mm for 2 figures. 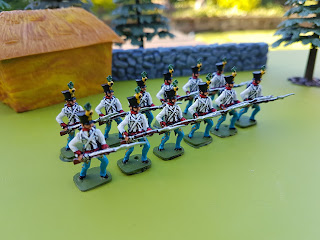 For basing in the early 70s I would have used beer mats. Its been a long time since I last saw a beer mat in a pub so I think I will use Daler Art Board and cut to size 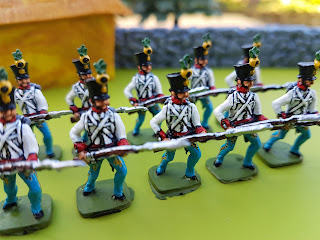 The figures are painted as 37 Infantry Regiment - Weidenfeld with poppy red facings and yellow buttons. I used a gold gel to apply the buttons. I got this from Paperchase from their own brand. They also do silver and white. I left the figures 24 hours after using the gel pen before varnishing. 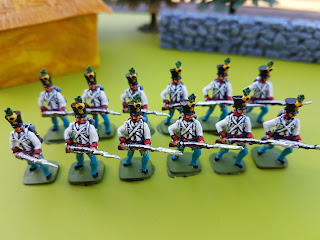 Next up I am going to paint some Cavalry. I have bought some French Elite Hussars with swords (FN 315) from John Cunnigham who offers a small selection of recast Hinton Hunt figures.  I will paint these in groups of 6 for cavalry and 12 for infantry.