Its been a while since I have had a game and this is partly because I only have access to a kitchen table which for some reason my wife wants to use for eating meals.

So in the last few weeks I have been looking at alternatives for quick set up and play games that can be played in a small space.

I have been looking at Neil Thomas One Hour Wargame rules and DBN.  I have decided to first give DBN a go and this has been influenced by what Lee has been doing on his blog http://napoleonictherapy.blogspot.com/?m=1

So I dug out my old Napoleonic 15/18mm armies and picked enough figures for two 12 point armies.  I spent sometime refurbishing the figures which included new flags, rebasing and a two coats of gloss varnish.

For terrain I kept it simple using one of my old mdf boards with some hills made by cutting up another board. I dug around in the shed to find some trees and a building. The roads were made in the mid 70s out of plasticard.

This morning I had a first game of DBN with my son Max.  I am sure I got a lot of things wrong but the game was fast paced and completed in just about an hour. Max won.

The initial set up. This is an 1809 encounter with the Austrians, commanded by me, attacking. I pushed forward my central Infantry supported by artillery on the hill. I also launched my cavalry in an attack on my right flank however one of my light cavalry brigades is hit by French artillery fire.

My left is anchored by two brigades of militia infantry.

A brigade of French Light Infantry is deployed in the small village of Schwartzdorf. My artillery opens up a desultory fire on the village.

The Austrian Columns close with village as the French advance to turn my flank. 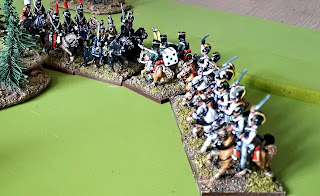 The cavalry battle on my right is in decisive and my hoped for breakthrough as stopped in its tracks.

I do however manage to get one heavy cavalry brigade to threaten the French centre. 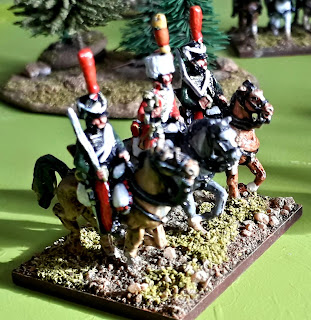 The French respond and move up a light cavalry brigade and although I get a charge in it is easily beaten back.

In the resultant firefight the French prove to superior to my poor Austrians and the battle is over.
Max enjoyed the game and says he will play again. Well at least it kept him off his Xbox for a while.

When I game with my classic Napoleonics I use the Charge rules by Young and Lawford.  I have been gaming with 1/2 size units but as my collection has grown I have come to realise that larger units maybe the way forward.

My current 24 figure Infantry units represent a battalion so why not put 2 battalions together and add a unit of Skirmishers.  In all a unit will muster 61 figures and in Charge the unit can take 31 casualties before going below 50%.

Today I got a few figures out and set a brigade of 2 units. I set up the unit in line with 2 options.

Firstly with the two units side by side with a cloud of skirmishers deployed.

The second option is with the combined elite deployed on each flank.  A third option would be to merge the elites and have 3 16 figure sub units. This option would replicate the Charge organisation with each unit having 3 companies.

The final picture shows a massed column of Infantry.