Here are a few GNW flags I did for my 28mm figures. You can change the colours of the Russian Infantry Flags using Paint so you can use them for any regiment. 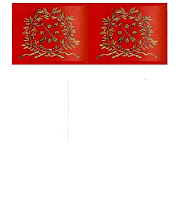 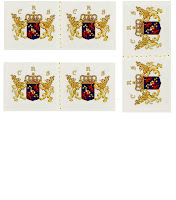 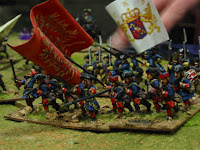 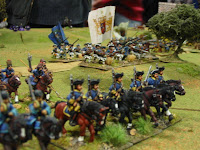 A couple of pictures of my GNW figures in action including some of the flags I made.
Posted by Mark Dudley at 23:53 1 comment:

Flags of the Seven Years War

I have added a few flags I did years ago for the Seven Years War. They are simplefiles so you can save and edit in micosoft paint and print out. They may not be state of the art but look reasonable once on the table  You can always add some highlights if you wish.

I will dig around my files as also have a few GNW ones somewhere.
Posted by Mark Dudley at 08:00 4 comments:

Here are some of the first shots of the game. Sorry about the quality by my Wargame room is in the basement and it difficult getting the lighting right. 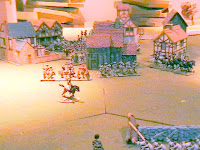 Sittingbad nestles by a beautiful meandering river. In quieter times it is a key trading centre and specialises in the local delicacy - Leder Hosen and frites with mayonnaise. Trade in the town today is somewhat quieter. A few civilians are busy packing their belongings as Imperial army prepares for action. 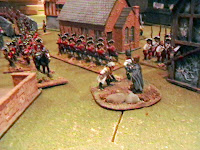 Imperial reinforcements under Lentulus arrive, The Pandour regiment in there lovely red coats see more than a few amorous glances from behind the shuttered windows 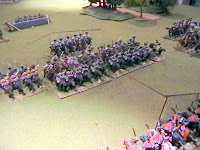 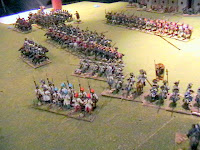 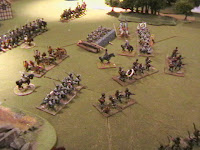 Now sooner had the Pandours marched through town the action was underway. The Herzog Johann has deployed his 3 cavalry regiments in the van of his army. The Gendarmerie support by the 1st Hussars clash with Kornbergs Cuirassiers. After two rounds of melee the Gendarmerie are reduced to below 50% and the Hussars take a beating. Kornberg loses just 5 troopers. On the Imperial left the Dragoons De Saxe, although facing the heavier Montmort Dragoons, give as good as they get with both sides retiring to reorder the ranks. 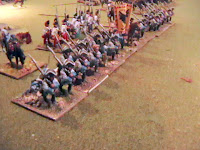 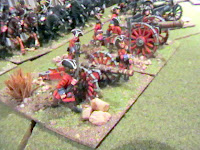 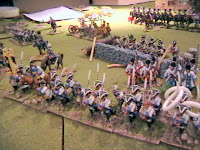 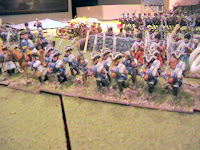 artillery opens fire on them. As the losses  mount dense columns of Electoral Infantry make for the Imperial left flank
Posted by Mark Dudley at 04:52 5 comments:

The Lads, well some of them, are coming over tonight for what promises to be a good evenings entertainment as we refight the classic battle of Sittangbad.

I have changed the organisations to fit in with my 28mm collection. Each infantry Regiment will consist of 48 figures with 3 line and 1 grenadier company each of 12 men. Cavalry units will consist of 3 squadrons of 6 and Light infantry battalions will have 2 companies of 8. I have reduced the number of Light infantry to 1 battalion for the imperialists and 2 for the electoral forces I have also reduced the electoral artillery to 2 batteries rather than 3.

I have also picked up a copy of Messrs Grant and Olley Wargaming in History it is a jolly good read a has lots of nice photos which show just how good a SYW game can look. Only trouble is it makes me want to go for 36 man units as standard rather than the current 16 man units I have in my 28mm collection. 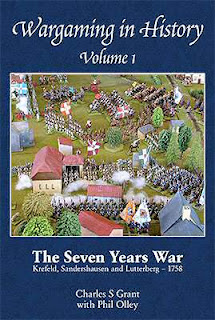