Today I visited Graham to pick up a box of old Napoleonic figures which had been gifted to me by Donald. Donald was one of Grahams school wargaming friends in the early 70s.

Graham had recently met up with Donald after many years and when Donald realised that Graham knew me he passed on a file box of his old figures from school. Graham remebers they use to buy their figures from Blunts of Mill Hill Broadway. A shop a I occasionally visited.

Although there were no Hinton Hunt figures the box did contain over a 100 Garrison and Les Higgins figures. There were also 150 (ish) Hinchcliffe and Minfig 25mm figures and my son has got these out and is says he wants to play with them. He also asked about painting some. 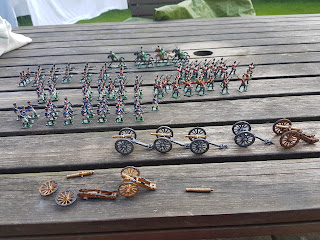 Panorama of the LH and Garrison figures including some artillery. 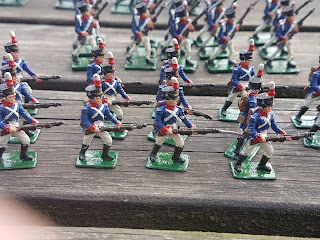 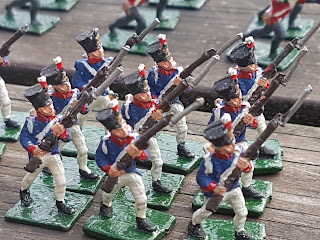 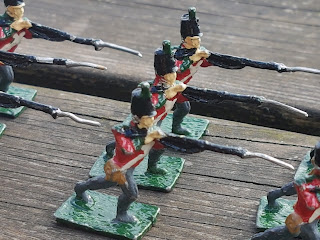 Garrison British Infantry. This has a code BN5 but I cannot find it on any list. There is a photo on Tony's Prometheus in Aspic blog.

Tony mentions that these don't come up very often perhaps because they had a short production run as they are a rather 'distintive' pose. 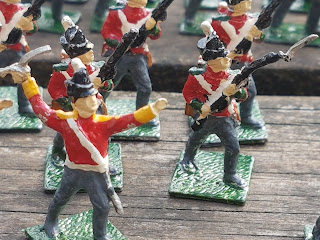 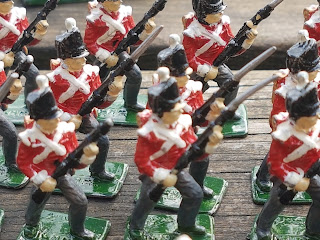 Any finally some Garrison French Chasseur a Cheval.  Back in the 70s I had a unit of Garrison Hussars so its nice to see these figures again.

Quiet a few of the figures have broken bayonets so I need to make some repairs. Of course I could just use them as they are as bayonets would only be fixed for a charge.
Posted by Mark Dudley at 08:47 5 comments:

Following my recent post on French Hinchcliffe Artillery I was contacted by Les B who kindly offered me some 20mm French Artillery he had got as part of an ebay purchase.

Les sent the guns and covered the postage. A true gentlemsn and another example of the generosity of the Wargame community.

The artillery arrived this morning and are very nice models indeed. Are these Hincliffe ? 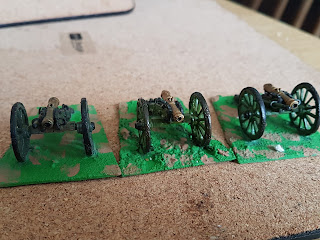 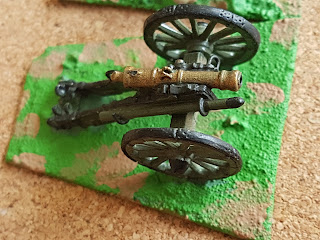 I must stop going to my local Oxfam.

I had to go to down town this morning so I thought I would drop into Oxfam (again).

As a result I ended up coming away with a bunch of what I am fairly sure  are Lamming SYW figures.

There are 20 Prussian Jager types. 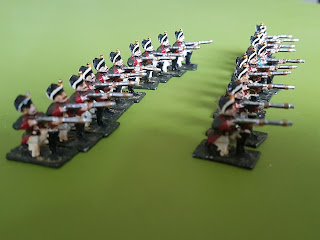 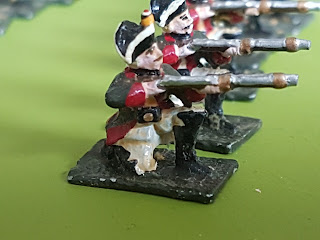 The second unit consisted of 25 Musketers, a few had broken bayonets, 5 drummers and 2 officers. 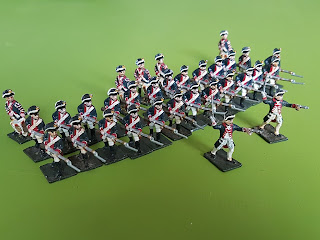 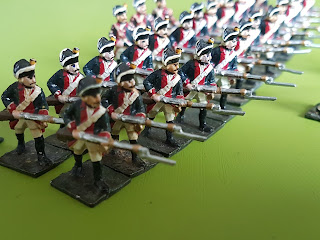 One of the signs that these figures are Lamming is the the nobly, grass like, effect on the bases. 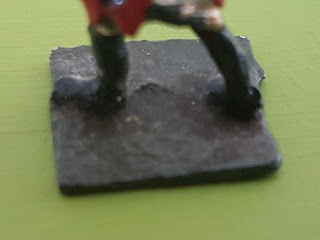 I did compare these figures with some Les Higgins Marlburian and they are a tad bigger.

The Oxfam Hinton Hunt seam is now all worked out. The last bag of miscellaneous Napoleonic bits and pieces went out this morning.

Of course I nipped  down anyway just to see. It included some items that would prove useful.

First up there were 5 artillery pieces although one was missing a barrel which I will have to find a replacement for. 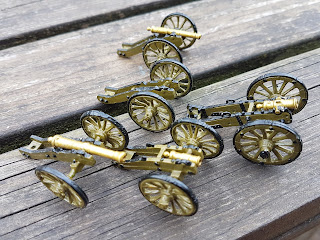 I remember having a Hinchcliffe gun and that they had small indents in the barrels and small roundels inside the gun carriage. 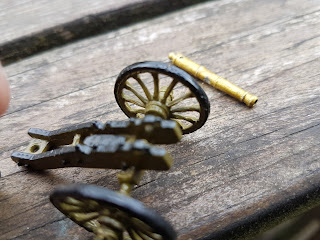 Well I am confident that these are indeed Hinchcliffe artillery and I am pleased to add these to my collection.

Also included where 7 more Hinton French Officers and these will be used to officer my new battalions I plan to get from John Cunningham. There were also 2 French elite Hussars. 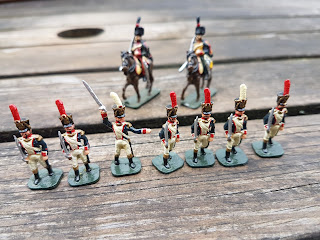 Interesting there were a few other items including what I believe are Douglas Miniatures Spanish and a Alberken/Minifig 20mm British Officer. 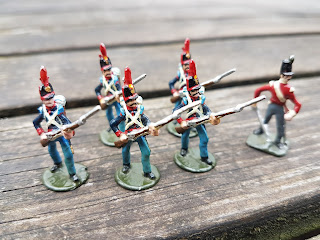 You can just make out the DM on the figure base. 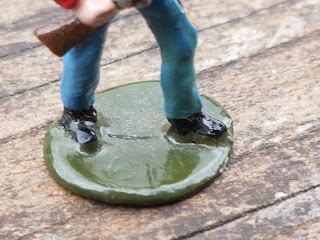 There were a few Minifig S range figures, which I don't need, however one is rather nicely painted so may make into my French army. 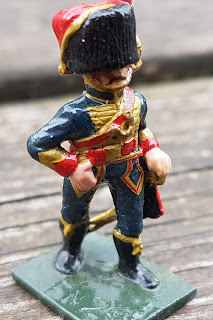 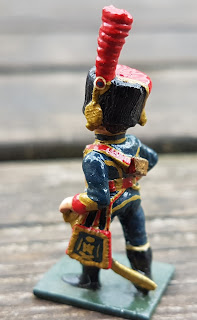 I have feel lucky to have found so many Hinton Hunt figures over the last few weeks and it certainly had helped to get this project progressing along nicely.

Over the last 2 weeks I have been continuing refurbishing and basing on my classic Napoleonics.

First up is are some French.  I have repainted the white on the trousers and the front of the uniform but left the turnbacks and straps on the back packs alone. I use Vallejo Off White rather than full white.

If you do touch up the paint job on old figures then the key is to keep it simple as its easy to get carried away and end if over painting the whole figure. 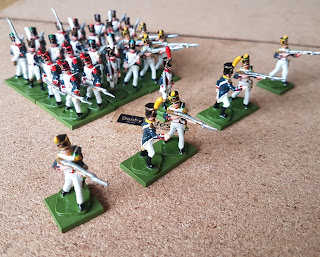 The a Grenadiers had been originally painted as Voltigeurs so a splash of red and voila they are now Grenadiers. 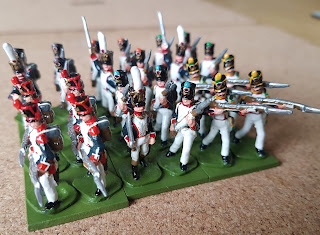 I also had enough Voltigeurs to form s skirmish company. The officer is in fact an artilleryman. The French light firing is one of my favourite Hinton Hunt figures. 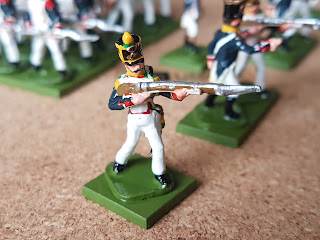 A close up of the Voltigeur shows the original, slightly yellowed white on the pack, and the fresher off white on the trousers. 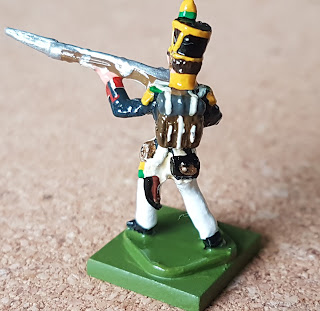 I have a few old minifigs S
Range in my lead pile and I decided to freshen up some French Artillery crew to use until I get my Hinton Hunt Guard Artillery done. 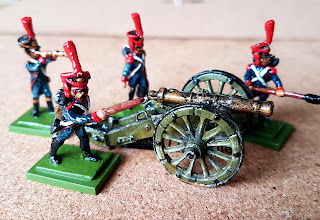 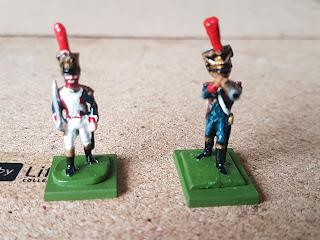 The Minifig figures are s little bigger but I do like the chap with the telescope seen here next to a Hinton officer.

My original Napoleonic collection in the 70s consisted of figures from a range of manufacturers and they all happily coexisted in my games. I do have a few S Range Minifig cavalry which may get a refurb so I can start playing some classic games whilst my forces gather. John Cunningham has added more Cavalry figures to his recast list so I will be recruiting some cavalry soon. 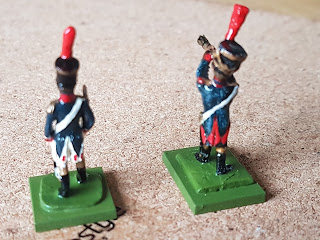 To finish off I have have based a unit of 12 Portuguese I got from Oxfam and the 12 Hungarians I painted earlier this year. 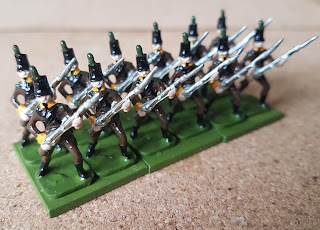 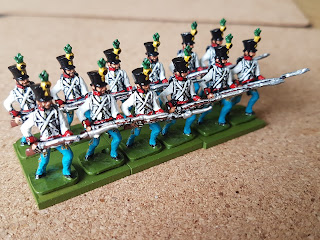 Until I get the rest of the full Hungarian unit done I will just have to combine these into a rather odd wargame unit.