My interest in the ACW goes back to my very first Airfix figures.  I have a fairly large 28mm collection but as my gaming table is limited I was looking for something in a smaller scale.

Last year I bought the  Altar of Freedom rules and over the last few weeks I have been adding to my 10mm AOF collection. I have been basing the figures with between 12 and 14 figures per brigade base. The figures are mostly Blaze Away with a few of the old Pendrakens mixed in to add variety. I have also done a few head swaps.

I have also being making fences and trees. I need to get some more tree armatures as I am going to need a lot more trees. 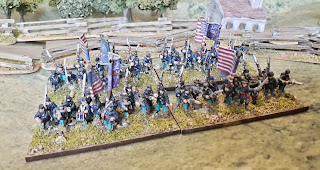 I have another 6 brigades on the go and just need to paint the command to finish them off. I also have 4 command bases undercoated.
Posted by Mark Dudley at 08:59 7 comments:

With retirement fast approaching I thought it would be a good idea to try a game of Neil Thomas One Hour Wargame rules solo as a possible set of rules for some light gaming.

This morning I played my first solo game using scenario 4 - Take the High Ground.   I used one of the alternate firing mechanisms with each unit having 5 strength and cavalry, artillery using one D6, infantry two D6 and Zoauves three D6 to fire. A four plus is needed to score a hit.

The union start the game holding the high ground and they have 3 infantry, 2 cavalry and one zoauve unit. They deploy  2 of the infantry units on the hill.

The Confederates have 3 infantry, 2 zoauves and 1 artillery unit.

I played the game with no sutility to the tactics and saw the Confederate and Union trade musket and loses in a stand up fight for the hill with the rebels gaining the advantage.

In the woods both sides had a zoauve unit and the fire fight lasted a number of turns  before the Confederates down to 1 hit managed to destroy their opposite number.

The other Confederate zoauve unit is able to emerge from the woods and take on a union cavalry brigade (represented by dismounted 7th Cavalry).

When they are joined by the 2nd zoauve unit. 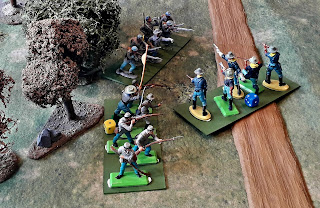 The combined fire quickly destroys the union cavalry. The union have now lost 5 units to the confederate 2. A rebel victory.

I plan to run the game again later today and look to apply the lessons learnt from my first game.

I am wondering if 6" bases are a bit large as there was little room for manoeuvre particulary when using cavalry.  I am thinking of increasing the table size to 4ft 6" by 3ft or alternatively reducing the sabot base to 4".

The figures are a mixture of Britains Swoppet and Deetail together with a few  Herald ones. The union cavalry are Deetail 7th cavalry figures.  I have made the movement strays from artist board painted a suitable green and used white tack to hold the figures in place.

My son has unpainted Imex, Armies in Plastic, BMC and Italeri figures which I can always raid to paint up a few extra if needed.

I plan to play a game tomorrow. Take the High Ground looks a good scenario to start with.

54mm ACW for One Hour Wargames

As a kid I had 54mm ACW Britains and Herald figures and I still have them after over 50 years together with some later Britains Detail figures.

Yesterday afternoon I spent a few hours putting as many figures together from the bits and pieces I have and realized I have enough for two ACW armies for Neil Thomas One Hour Wargame. Each army consists of 6 units and I will be using 6 infantry, 3 cavalry figures per unit.  I also have 3 Britains 12Lb Napoleons plus gun crew.

I have made a cardboard base 6 inches by 2 1/2 and painted it green to go with the old toy soldier style and put together my first unit. 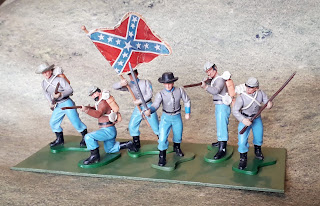 I am missing a few muskets and will make some replacements from plasticard.

My few old Herald figures date from the mid 60s and will need some re painting to make serviceable. The Britains Swoppits are in pretty good condition.