Last year I picked up some Alberken/Minifig FN20 Young Guard Voltigeur advancing however well short if what I needed to form a complete unit. I thought it unlikely that I would be able to find any more.  But I lived in hope that some would turn up.

I was very pleased therefore that
this week I was able to complete the unit after an ebay purchase. 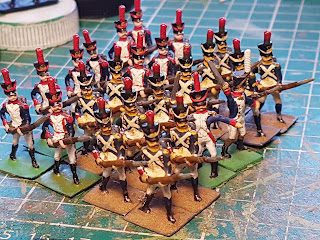 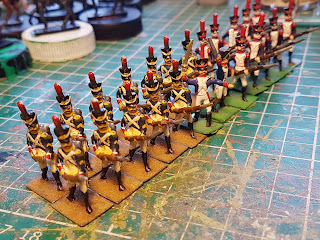 The YG are now added to the awaiting a bleach dip/painting  pile.

Included in the ebay lot was one of those odd figures you get with classic Napoleonics. This is a FN23 YG Officer charging. Although why this pose is described as charging is beyond me. He looks like he is directing traffic. I will try bending the arms and perhaps his head to see if I can get a better pose. 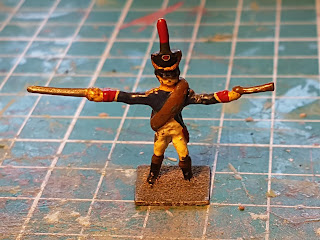 The weekend started well when on Saturday morning the postman delivered a small parcel from John C.

Inside where a dozen each of French Old Guard and Hungarian Grenadiers firing.  I had been short of these figures to make up my 24 figure units.

The JC figures are seen here posing next to a couple of my original figures still wearing my rather poor 70s paint job.

On Sunday I ventured down to Partizan and the Newark showground. This the second time I have visited the new location since it moved from Kelham Hall.

The standard of the demo and participation games was exceptional and with the trade and airy location this is now the best show of the year.

Being rather attracted to things old I rather liked the simplicity of this game using flats from Tony Bath and Peter Guylers collection. The battle of Trimsos from Featherstones book War Games. 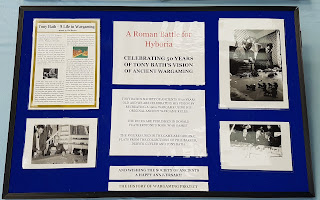 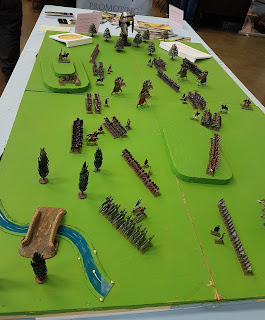 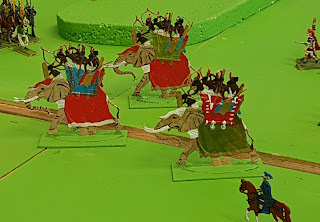 There were so many other games on show but I was also taken with this game using Command and Colours Napoleonics. 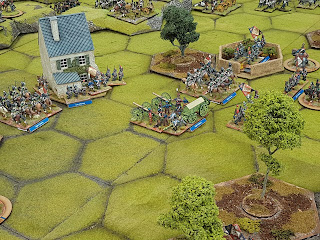 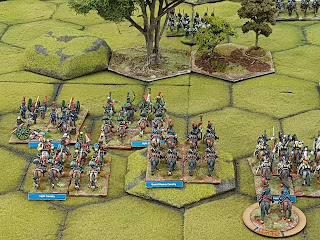 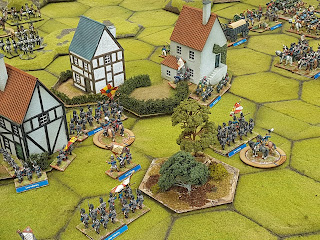 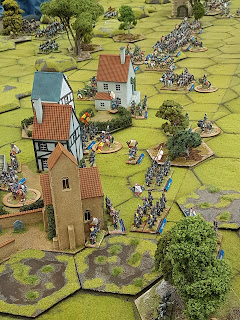 On the purchasing front I picked up some SHQ Prussian and British 6lb artillery to go with my Napoleonics. The SHQ models are seen here with some HH Prussians. 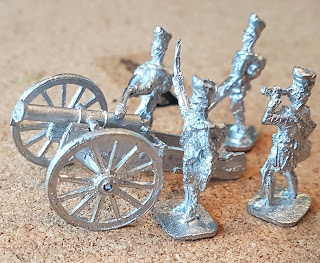 I also bought a few books. Firstly a couple of Summerfield books on the Prussian Army. These are as new and cost a less than a third of the original price. 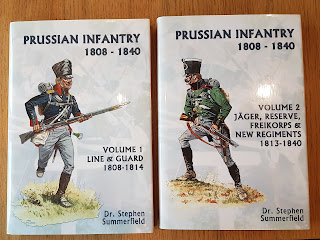 I also bought a book on Wellingtons campaign in Southern France for less than a price of a Wargame Magazine. This is a campaign that I know very little about.

I was also particularly pleased to get a new copy of Skrine book Fontenoy on the War of the Austrian. This is Terry Wise produced facsimile and is book 152 of a limited run of 250.  This I got for a fiver. 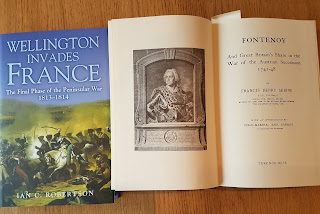 Marshal Joachim Murat (1767-1815) was one of Napoleons most flamboyant and dashing cavalry commanders, but he was perhaps less impressive later in the wars, when he was promoted beyond his abilities. Which is perhaps true of many of Napoleons Marshals particularly in the later campaigns.

This morning I finished painting my Alberken/Minifig Murat. 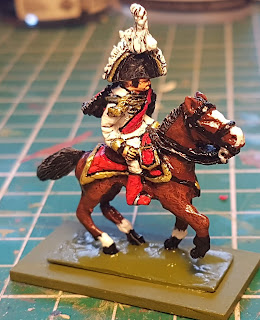 I have based the uniform on the one he wore in the earlier campaigns and the battle of Austerlitz. 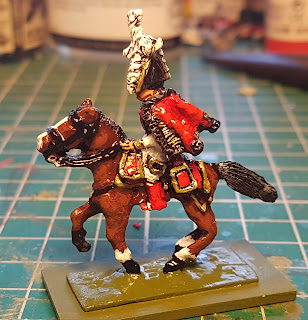 Many of the pictures show him riding a white horse. Whether he did, or whether it was artistic licence, I decided to go for a darker horse to act as a contrast to the uniform.

Pictures also show his white uniform festooned with gold but I decided to tone it down a bit.

Having got a Murat perhaps I should paint him a unit of Infantry to lead and in my 1815 armies my Murat will be present at Waterloo.
Posted by Mark Dudley at 01:01 5 comments: 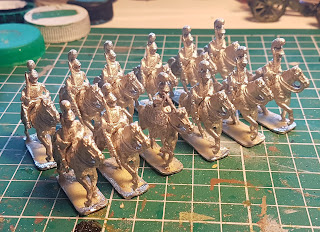 I decided to try and make a trumpeter using the FN106. Using my dremel I removed the carbine, cuirass, cartridge box an belt.

I tried making a trumpet however I could not get a reasonable result.  I therefore made one using  the trumpet and hand from a plastic Zveszda SYW Prussian Hussar. 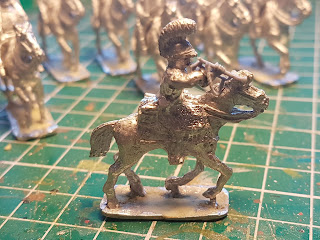 Where the Carbine had been a used the point of a file to dot the metal to look like a sheepskin. 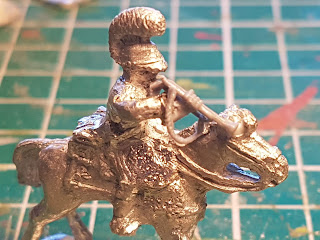 Finally I used a little bit of Miliput to add a sword hilt. I also used Miliput on the bases of all the cavalry to fill and smooth the bases. 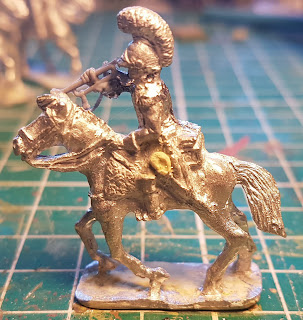 No self respecting Napoleonic collection would be complete without a Napoleon.

I got the figure of ebay a while back and finished him this morning. 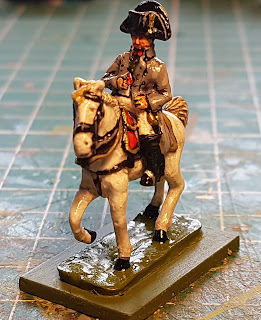 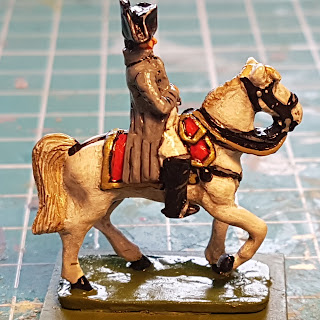 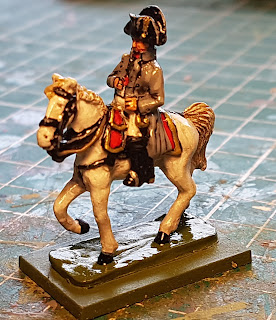 The Alberken Murat figure is nearing completion and I have started cleaning up 12 recast French Carabiniers ready to join the painting queue.
Posted by Mark Dudley at 01:34 9 comments:

It has taken longer than planned but I have completed my Old Guard Artillery. There are 5 original Hinton Hunt figures and 3 Alberken/minifigs. The artillery are I think Warrior pieces I picked up at the old Harrogate show about 20 years ago. 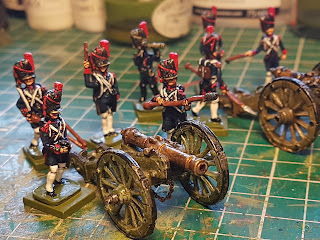 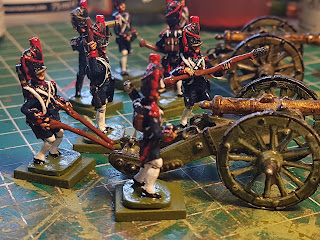 Here is a comparison of an Alberken and Hinton side by side. The pose is similar and the two could almost be twins. 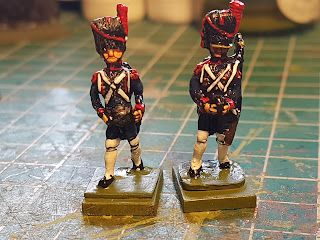 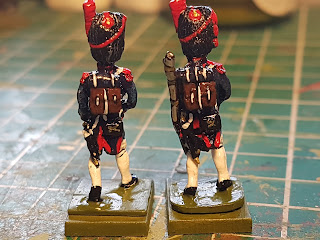 For those of weak disposition look away now.

Years ago I painted some plastic HaT 1806 Prussians as Spanish. The other day I found them and decided to give them a couple of coats of good old gloss and put them on new bases. 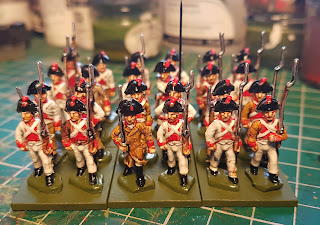 Will I be burned at the stake as a heretic I wonder.
Posted by Mark Dudley at 01:25 11 comments: