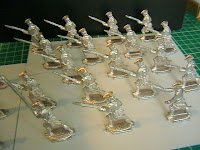 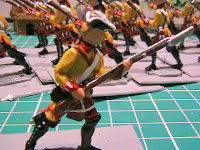 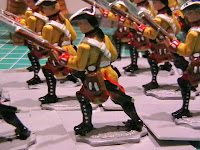 The Frei Electoral Kries (FEK) is a small group of states and free towns who have grouped together for protection from their larger neighbour the Grand Duchy of Calvados.  The Calvadorian minister has been building his forces during the winter months and news of the massing of troops on the borders of the Frei Electoral Kries has sent shivers down the various princes and rulers. Elector Maximilian the Ardent quickly authorised the creation of a new company in his army recruited from the Electresses guard .  The next batch of Prince August Figures all cleaned up and ready to go.

This company is painted as the Liebgarden is its fine yellow uniforms trimmed with red. These are the Electresses Emma's favorite colours with the yellow matching her perfect complection and the red the brightness of her lips. Each man of the company is on first named terms with the Electress and will defend her honour with their lives.

The Liebgarden march past a line of recently purchased Merit Trees and a plastic windmill (recent purchases from eBay).  The unit is still to be issued with their green bases or the company standard in the next few weeks.