I had a productive week this last week.

Started paint the 1st company of my Erprinz regiment.

Based up 47 AWI 40mm figures on 20 by 30 mm bases. These are the same size as my Prince August figures so I can use both collections in the same game. Should look OK from the side.
Set up my Wargame table, with a bit help from my 4 year old son Max,  for a Sittangbad refight using Charge and my 28mm collection. For this game I will be using 3 company line regiments without grenadiers and with more limited numbers of light troops. The game is scheduled for Wednesday 7th April.  i post o few pictures of the terrain and the initial dispositions.

I might also use the terain for a 40mm Prince August/AWI game - perhaps the Battle Standwell or the 1st Battle of Sittangbad.

Now we are on British summer time with lighter evenings I decided to get some Prince August casting done. As I now have 3 moulds for the basic infantry figure I found casting a lot quicker. In all I got 1 Nuremburger artillery piece, 20 advancing infantry, 8 marching infantry, 6 gunners, 8 officers, drummers etc and 5 mounted officers cast up in one and half hours.


On the gaming front the Ilkley Lads met to run through the playtest of our demo game for Sheffield triples which this year will be the Battle of the Grannicus. Instead of using Piquet we will be using Command and Colours by GMT adapted for the wargame table.
Posted by Mark Dudley at 04:40 1 comment: 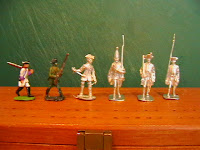 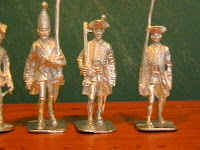 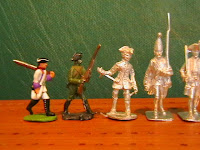 I have posted a few pictures of my growing 30mm Classic Collection. From left to right the figures are:

What interesting is the difference in height between the various figures but particulary the difference within the Tradition range. Not that I am worried as Peter Young used figures from many of these ranges.

My next gaming activity will either be the Chiraz Campaign or refighting Sittangbad. Both will be using my 28mm collection.
Posted by Mark Dudley at 04:02 4 comments:

Erbprinz has been mobilised

Painting of the Minot Jager has been some what slower than planned as I have spent some time basing up some of my old 28mm SYW collection ready for the Chiraz campaign. I have decided to play the campaign as standalone games. I not sure about playing the river crossing as I don’t have models of barges and pontoons so will limit the campaign to the other 4 scenarios.

The other piece of news is that the Electoral forces have been given a boost by the imminent raising of a new regiment – the Erbrpinz. I have 61 figures on order from Sweden and hopefully they will arrive in time for my birthday on the 17th March. I intend to paint these as close as possible to how the unit appears in Charge. I blame Phil Olley for this as it was seeing his pictures on his classicwargaming blog that got me hooked into recreating my youth.

As spring approaches I hope to get some more Prince August 40mm figures casted up. I have the moulds and plenty of lead so just need some fine weather and a few hours spare hours.
Posted by Mark Dudley at 09:50 4 comments: 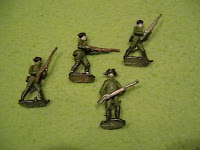 I first bought these 24 of these Barry Minot figures way back in the 70s when, from memory, I visited Willie figures in Sloane Square. They are I think 1806 Prussians and originally had bayonets. I had removed these to make them into Prussian Jager. 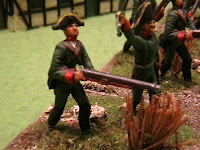 The first picture shows how far the painting of 16 of them had got since the 70s - a bit of Green and black. I did however finish 8 of them and the 2nd picture shows these figures based up for Piquet. These guys have seen plenty of action and with 4 extra figures painted will make up my first company of jager. 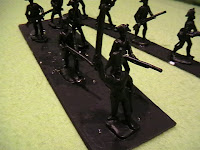 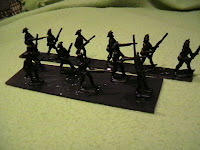 The remaining12 have been sprayed black ready for painting this week. They will be a frei corps company and will have black coats edged red and green trousers - probably named the Frei Schwarzen Jager. This unit will initially be an electoral unit but given these dubiuos values will probally see action fighting for both the electoral and imperialist as the campaign progresses.
Posted by Mark Dudley at 05:14 No comments: 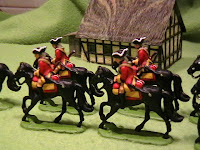 A squadron of the Schuch Dragoons patrolling the borders looking for any sign of Imperial activity.  The Schuch Dragoons are mostly recruited in the Kirsbach region and are often called the 'Bakers' Dragoons as many of the recruits come from the local bakery school. 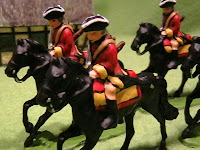 These are the 2nd batch of Spencer Smith figures I have painted. I have tried to copy the uniforms of the legendary Marchmont Dragoons from Charge. I have tried the black lining method to emphasize the different colours - a method I have not used in over 30 years. I also get the painting style simple and used plenty of paint to build of the colour. These guys have been finished with a gloss varnish and finished with 2 coats of matt varnish. I hope the extra protection offered with 3 coats of varnish will help offset the damage caused when un-based figures are tumbled about on the table and in storage. 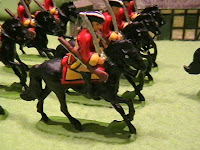 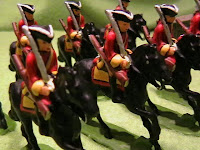 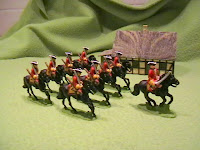