We played the second Petreville scenario from the Annexation of Chriaz using the Charge Rules.  This is a hard game for the relief force as not only are the numbers evenly matched by their attack is constrained by the narrow terrain 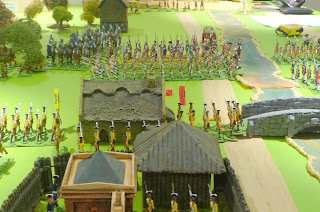 General D'Euan pushes the bulk of the Duchy of Calvados forces forward but decides to advance on both sides of the River Cressay and use the South Bridge to re unite his forces for the final assault. 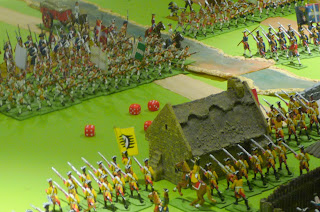 The action hots up on both sides of the river. The Sbrinz are able to drive back the Calvadorian skirmishers but are unable to stop the Livarot Regiment as they are driven off with 50% loses.

In the centre the Royal Boussin trade volleys with the Leibgarden. 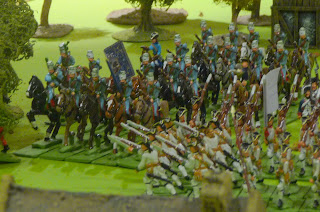 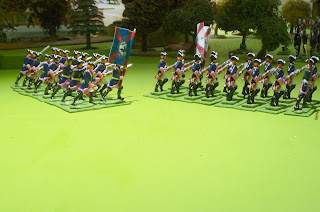 The Hock Regiment forms up ready for the Hussars attack 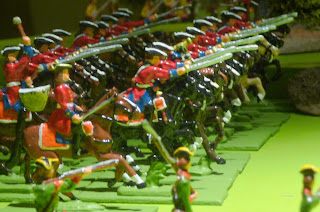 However the Dolcelatte Dragoons counter charge and after 2 furious rounds of melee drive the Hussars back. 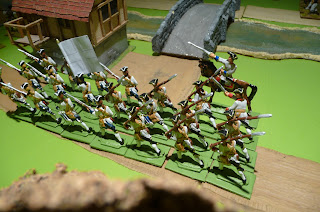 In the final action of the battle the Livarot cross South Bridge form up and advance against the factory only to be blown away by a tremendous volley from the combined grenadiers companies garrisoning the works. 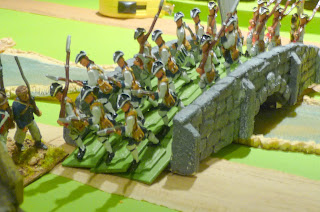 General D'Euan decides to pull back his battered forces and call it a day.
Posted by Mark Dudley at 03:23 3 comments: