I managed to get a quick game in with my Max, my 6 year old son, in the back yard as the weather was nice today. We used my small 30mm OS collection and the elementary rules from Charge with additional Light Infantry  rules added.  Max commanded the Imperial army while I commanded the smaller Electoral army 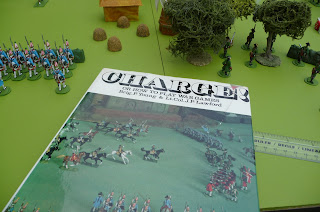 A small Imperial raiding force is tasked with capturing the flour stocks from Win De Millars farm. With 2 companies of infantry and a squadron of Schuchs Dragoons the task should have been a stroll in the park. 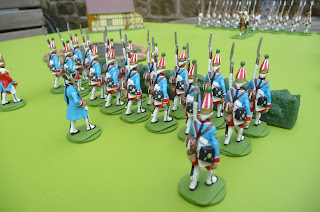 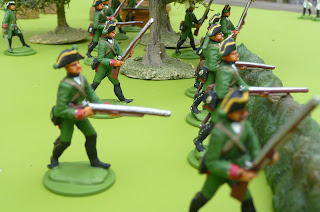 However the previous night a company of Electoral Infantry from the Erbprinz and a company of Jager move in to garrison the area. 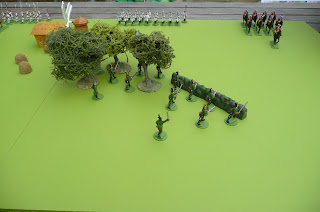 The Imperial forces deploy and plan to attack the woods with a company of the Kinski Infantry while  Schuchs dragoons are tasked with clearing the hedge line of the rest of the pesky Jager. 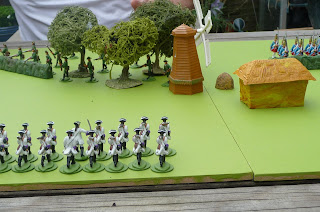 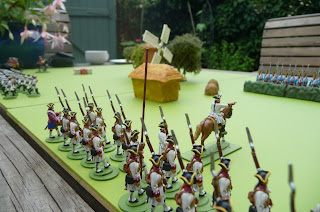 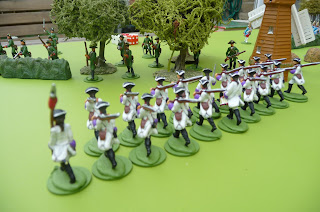 The Imperial Infantry advance in the early morning mist towards De Miller Wood next to the mill. The first shots from the Jager are a medium range which lays low 3 of the Kinski. Who halt and return fire. The firefight he was to last a number of moves. 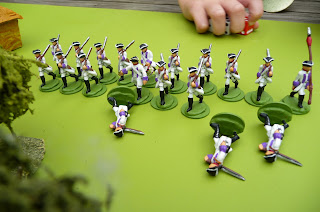 With the bulk of the Jager engaged with the Kinski Max decides to throw his cavalry at the Jagers lining the hedge. Although 2 Dragoons are dropped as they close the resultant melee is one side with the Jager being cut down. 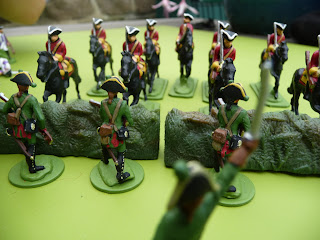 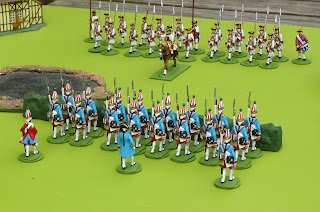 The Imperial Infantry advance against the Erbprinz who open up at short range laying low 8 enemy infantry. 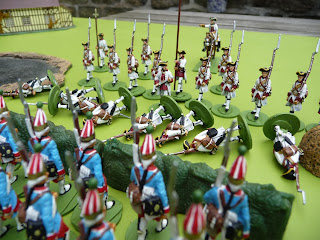 However the Erbprinz are about to face a nasty shock as the now rallied Dragoons threaten their flank. Two Dragoons are hit as they pass the Jager and they take further loses as the charge the Erbprinz flank guard. After the melee the Dragoons are are reduced to below 1/3 and retire.  The Erbrpinz and Jager are however close to being reduced to 1/2 ans 1/3 strength respectively and they decide to slip away. 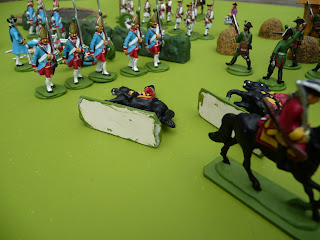 The Imperial army has captured the flour stocks but at a heavy price.

Even a 'mere skirmish' - an affair of outposts - can be brisk and deadly. A close call here for the Imperialists, by the look, but it shows that assaulting a defensible line of linear obstacles ain't no walk in the park. As instructive an encounter as it was - in the immortal words of General Strahl - 'short but desperate!'

Good on you Mark!

No doubt your son will look back on this with fond memories, Mark. I have good recollections of playing Avalon Hill wargames with my Dad as a kid. Although at the time I preferred playing baseball to serving as cannon fodder in Tactics II, some of that passion for gaming rubbed off on me.

Thanks for your responses.

The forces while small are just about right for gaming with a 6 year old. I plan to add a few more units to add to the numbers as he gains in experience.

I have some RSM95 Infantry and Jacdaw artillery to paint and will get at least one more squadron of cavalry done this year.

He stills likes his trains and playing Football and Rugby - but hopefully the seeds are sown.

Permit me to add my compliments to the others. I made Crimean-era ImagiNation armies with mostly 1/72 plastics picked up dirt cheap at a convention for my two sons, and we play a modified version of Morschauser's horse & musket rules. Sometimes I think it would be fun to try Charge! instead (I have that one as well).