It has been a while since I posted anything on the blog so here is an update on my demo game I put on at the York Show (Vapnartak).  It was a very busy show but I did get time to get a copy of the Wolfenbbuttel War by Charles S Grant.

The game featured  my Prince August 40mm armies with traditional Old School terrain. For rules I used a set published last year - Maurice by San Mustafa - so it was a case of Old School look and feel new School rules.

The game went down well and as with previous outings I received many complementary comments about the Old School set up as well as plenty of question about Maurice which are a pretty good fun set of rules.

Here a few pictures of the game 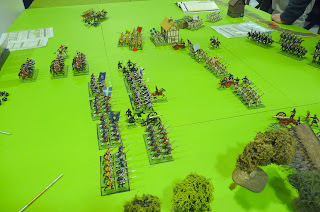 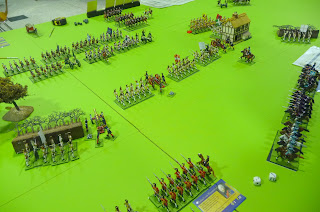 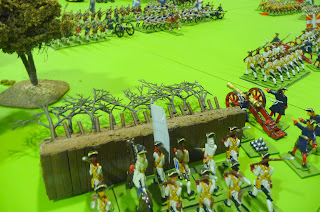 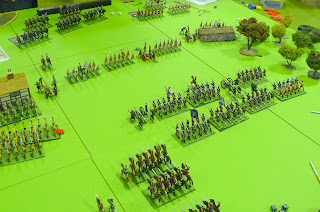 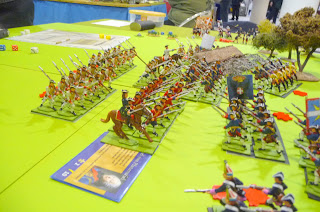 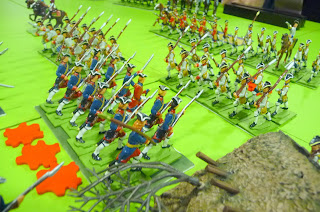 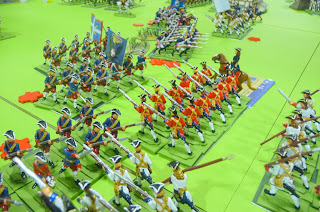 Great looking game - sad I could not make this show - how did the rules work ? , what size game are they aimed at ?

Mark,
the game looks fantastic. And I really appreciate that you are resisting the Old School current wave to build larger and larger units. I settled on 24 figure for my WAS/SYW armies, but these days it almost feels that, with units smaller than 36 figures, you are not *cool*. Your are 12-men strong, and they just more than fine. Congratulations on a beautiful game, and thanks for sharing! Adolfo

As I said on TMP I saw your game at Vapnartak and thought it was the best of the show.

really inspiring me to get back to my 40mm!

Very nice, can I change my units back to 16 again now?

That looks fine, Mark. Just goes to show the PA's can look good in their units, big or small.

Really great ...I'll be looking for that rule set soon.