When I first starting wargaming I had ACW Airfix armies supplemented with a few Minifig 20mm and Hinton Hunt figures. Later I collected 28mm ACW  armies which I still have.

I have numerous books on the ACW and have visited many of the battlefields in the Eastern theatre some more than once and Gettysburg three times.

So with this background it was almost inevitable that I would at some point get drawn into 20mm Classic ACW wargaming.

I have been thinking of getting some 20mm ACW figures for sometime and it was on a recent visit to Spencer Smith website that I read that the Jacklex range was now going to be produced by Mark Lodge who is a fellow Hinton Hunt collector.

After a call to Mark he sent me a few figures and they arrived today. 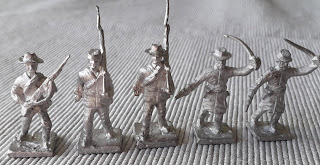 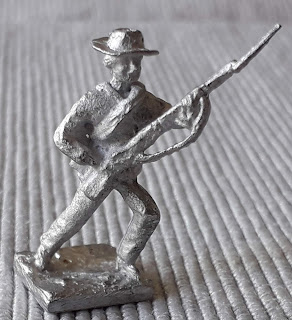 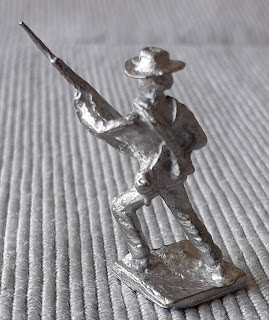 The figures are rather nice and I think will paint up a easily, particularly after doing my classic 20mm Napoleonics.

Mark tells me he intends to add some new figures produced to match the Jacklex style and will include Zoauves and extra command figures.

It is possible to collect a classic figures that are still available today.  For more info on this classic range there is a good article here  http://www.vintagewargamingfigures.info/rblack/jachist.htm

I understand that Mark will also be producing the other Jacklex periods including Colonial wars ,Russo Japanese War and 1917 US-Mexican War all in 20mm

Mark, I did dabble with the idea like you of doing some vintage ACW - not touched the period since the early '70s with some Airfix figures and Arthur Taylor's Rules for Wargaming. I painted up some to see what I could do with head swaps - I'll send some photos by email. I like the blanket roll look for the Union as well as the Rebs (oops, my sympathies are showing again).
What stopped me was the command figures which are limited and the officers in frock(?) coats really don't do it for me. That, and the lack of reins on the horses - I need a break from adding reins. But, if Mark produces new command figures (incl. a standard bearer and drummer), horses with reins and perhaps the head swaps or at least spare heads) then I might reconsider the project.

Head swaps and simple conversions may be the way to go. It will be interesting to see the extra figures.

The images on Spencer Smith website show the horses with reins.

Mark, I checked and my sample horse has none - looked at the SSM photos and you're right, most do but the standing horse doesn't. The issue with head-swaps is the cost as it gets a bit expensive if you want most to have the blanket role and at the same time most to have kepis (like I do) - it means buying almost twice as many figures as you need.

I'm very keen to see what you make of these, Mark. Jacklex figures have a particular charm. I love their simplicity.
All the best
WM

That is a consortium. I wonder if Mark Lodge would make a new figure in a Kepi with blanket roll.

I started painting a few samples yesterday so should have pictures up soon.

I do need to finish my Brunswick cavalry as well.

I do like those old Jacklex figures, also Jack Scruby, although those are really 'true' 20mm so very small in comparison. I have fond memories of a large scale refight of Antietam in 1974 when my Airix Rebs defended Burnside's bridge against all Yankee assaults. But I'm not going to be tempted into project creep until my Napoleonics are mostly finished. Unfortunately I've had no hobby time at all for 3 months due to being in and out of hospital.

Great looking figures. They'll be marvellous once painted, as you say.