A box of Prussians

I have been fortunate to receive some welcome reinforcement in a box of classic Prussians from a fellow gamer.

There are a bunch of Lanwehr (on the left) and whilst the bases have been filled down you can still make out the HH code numbers. I have started rennovating a unit of these figures and I hope to finish by the end of the month.
The marching figures on the right and at the back are probably copies of an Austrian marching figure which have been painted as Prussians.  I will probably strip these and paint up as 1813 Austrians.
I was also pleased that I now have some rather nice Prussian Garde figures. Not quiet enough for a full unit unless I add a detachment of Freiwilller jager to make up the numbers.
I was also pleased that there is a rather nice Prussian Mounted Officer (PN64).
There a few figures that are not Hinton Hunt types. Firstly a drummer that is I suspect a Lamming one by the look of his face.2 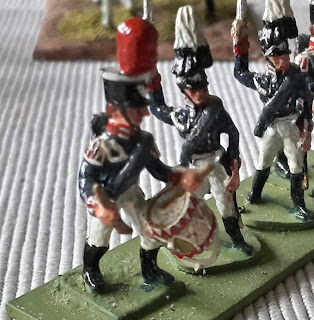 Secondly there is an Infantry man advancing. This one is a mystery. I assume he is a Prussian as he has a mess tin on his backpack. Could he perhaps be an early minifig/alberken figure. 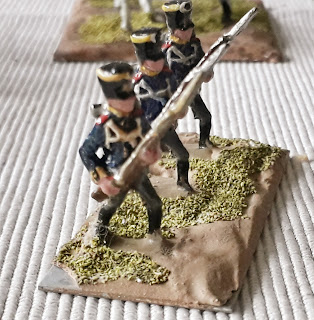 Am I going mad? I'm sure I've seen these before and made some dodgy comment about some looking French only to be corrected by WM?

You had a sneak preview. There are at least two Alberken French masquerading as Prussians.

You just have to love the enormous plumes on the Prussian Guard Infantry. I hope you are able to find enough figures to complete the unit. Will look forward to seeing your progress on the entire Prussian contingent!

Odd question - I recently picked up some old Hussars in a swap meet and I am trying to find out the manufacturer. Is there a source
group
facebook page of people who might be able to help?

"The Prussians are in the box" doesn't quite have the right ring to it, somehow. I'm delighted you have liberated them, Mark!

@jacko.... this is probably your best starting point :)

I wonder if I could make a plume out of Milliput and convert a line infantryman into a Guardsman.

What a brilliant haul Mark. Who doesn't like a job lot?!

I can try an identiy them. Send me a photo to the email address on the blog.

Napoleon Bonaparte:They're Prussians, but as far as the army's concerned, they're back in the box.

I need to retire so I can spend more time painting these figures.

A very nice collection Mark and I am sure that they will look magnificent after you have painted them.

That's quite a haul Mark, never mind the Garde the important thing is that you have Landwehr!

Splendid... what’s not to love about new toys... or the Prussian Guard.