I have a fair amount of WW2 in my collection including some old 1/72 which I built in the early 70s.  I still have the rules I used at the time at the Richmond Wargames club, hand written, in a school exercise book.

Over Christmas I got a copy of the Rapid Fire Reloaded rules and liked the look of the changes made to the original RF rules. They have an old school feel.

So over the last few weeks I thought I would get my old 15mm Western Desert collection out and have started fix up broken bits and rebasing them.

Here are a few of the British I have done so far.

In RFR each vehicle represents 5 and 3 AFVs make up a company.  Here as a company of Crusader 2s.

A company of Honeys.

3 motor companies on the move. 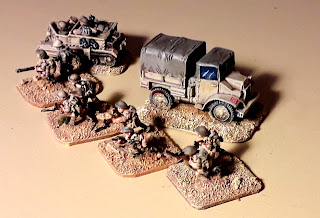 A motor company consists of a carrier platoon with Boyes AT rifle and 3 bases of infantry in a 15cwt truck.

Over the remainder of the month I plan to complete rebasing the rest of my British and Italians ready for a small game in February.

Nice job Mark, these rules have me painting up some figures and I have also ordered the 2nd edition rules to use as a reference point. Look forward to seeing yours go into action.

They're looking good but I must admit jamming an entire compnay into a single 15cwt seems optimistic... ;o)

I have a copy of these rules and they do look promising - but haven't got around to playing them yet .

Very nice Mark…
I do like Rapid Fire… I must pick up the new set for myself.

These look very smart Mark - are you going to show us any of your old 1/72 stuff?